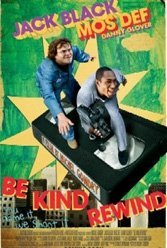 If Michel Gondry (“The Eternal Sunshine of a Spotless Mind”) is an acquired taste, he’d best be consumed minus this slight, choppy, ultimately disjointed condiment. Dimwit clerk Mike (Mos Def) and bungling friend Jerry (Jack Black) are the bungling mainstays of a Passaic, New Jersey video store (VCRs; hence, Be kind, rewind) run by music-loving coot Mr. Franklin (Danny Glover), who swiftly moves off-camera to attend a Fats Waller commemoration. This leaves clueless Mike to run the shop. Ah, but there’s loose canon Jerry. After Jerry gets zapped trying to dismantle the local power plant (go figure), he ends up demagnetizing the tapes, leaving dumb and dumber with the bright idea of recreating the erased flicks using video-cams. By saving Mr. Franklin’s enterprise they also save the world, and his imperiled shop.

This is intended as a homage to film but turns instead into a Hollywood ending attached to a quirky European conceit. Gondry’s first real pick-me-up occurs 30 minutes into the film, when the boys begin re-filming “Ghostbusters””— they call their remakes “Sweding,” as in the real thing but from Sweden. Little use is made of anyone’s talent, though Mia Farrow recreates her vintage loony tunes look as witless Miss Falewicz. This is a good idea for a short subject — a lost art — that’s unhappily force-fed into 90 minutes. One of these days, though, someone will give talented Mos Def material he can work with and he’ll get his Jamie Foxx-like “Ray.”