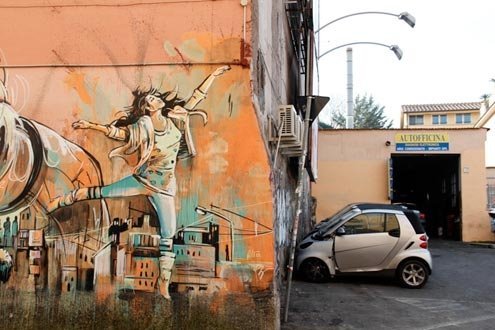 city can’t survive on ancient nostalgia alone, something Rome’s safari-clad tourists — at home amid the ruins — tend to forget. There needs to be a relationship between what was and what is. Hope and growth are essential. That’s where street art comes in, and with it photographer Francesco Amorosino.

Amorosino is a dedicated follower of the Rome street-art scene and today he’s headed for San Lorenzo, a traditionally working class neighborhood whose twin landmarks are the Termini railroad station and the sprawling basilica of San Giovanni. Art-wise, the neighborhood is young, hip, active.

The vibe here is different from elsewhere in the city. While still Italian, it has a strong multi-cultural pulse in keeping with the ethnically diverse neighborhood. Walls are covered with posters, stickers, and stencils, some sharp, some falling apart. Cheeky spray-paint pieces or paper-and-glue expressions are reminders that the city’s clock hasn’t stopped, and that history hasn’t squashed the desire for a modern if ephemeral twist on urban expression. It’s both enticing and sad to know some of the works won’t last more than a few days before they’re removed.

Seeing Rome through Amorosino’s lens is to walk into a landscape frame by frame. The lens takes in both dainty old ladies with their shopping bags tut-tutting the rain from under bar canopies and the terracotta-colored buildings that house Thai supermarkets or Egyptian fruit-vendors. It doesn’t focus on one thing, either the harsh-grey, litter-strewn asphalt or picturesque drinking fountain, though both are evident. Instead, it seeks the bigger picture. In it are fleeting colorful expressions produced by JB Rock, Diamond, Alice, Lex & Sten, Omino 71, and Mr. Klevra, to name a few, artists who slink through the city with spray cans and rolls of paper, leaving behind their color-streaked fingerprints.

Street-art tends to flourish where students live and spend their time. “Policing makes the city center pretty much out of bounds,” says Amorosino, huddling under his yellow umbrella. Instead, he prowls San Lorenzo, San Giovanni, Garbatella, Ostiense, and Pigneto — most of them outlying neighborhoods — in search of new pieces.

Though Rome’s street-art scene remains small and tightly knit, Amorosino says the artists keep an open mind to newcomers and those curious about their work. Amorosino got to Rome a decade ago to study communication but became mesmerized by what he saw on the city’s walls. He soon became both apostle and messenger, shooting piece after piece before they were painted over or torn down by local authorities.

“Where contemporary conventional art is elitist and removed from most people’s reality, street-art speaks the language of the people,” he says. “It brings light-heartedness and life amid all the dust and grime of big city life.” It is, he adds, a way to “metabolize” urban life.

Take the works of Alice Pasquini, a Rome-born visual artist who studied at the city’s Academy of Fine Arts. Her poetic and emotionally charged murals with their portrayals of strong, independent women have brought her international recognition. The team of Lex & Sten, considered the pioneers of Italian stencil-graffiti — their signature portraits are composed of thousands of lines — have attained similar status. Their work has appeared at contemporary art hubs, including Rome’s MACRO Museum, and was also displayed at London’s 2008 Cans Festival organized by famed British street artist Banksy.

But Rome remains old school, insists Amorosini. It lags behind going trends in part because the city is burdened by a general consensus that street-art is frivolous. Rome’s pieces are simpler because the artists are less stimulated than those in other major capitals. “Looking at Italian street-art in comparison to say, English,” he says, “is like comparing 17th-century paintings to 20th-century abstract art — Rome’s artists forget to move in a three-dimensional world, they are fossilized, continuing to use posters, stickers, stencils, spray-paint and little else.”

Still, the pieces have strong spiritual, even epic overtones. They reflect the cultural heritage that bore them. They represent a young and vibrant side of the city that’s remote from more traditional visions but deserving of attention because, unlike so much of what is on offer in the ancient city, they grab the present moment and say, “Be here, now.”