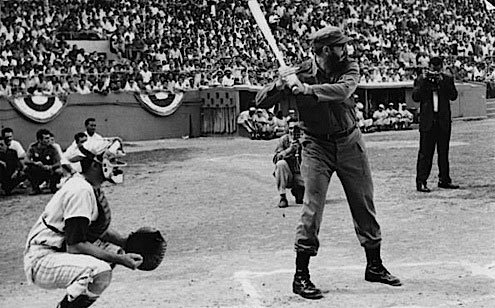 y father brooded in July. Heat made him dour. He sat on a wooden lounge chair on a porch overlooking the sun-mottled asphalt and dreamed of wars. I was less grave. So was Petie.

We instead interested ourselves in what made insects work (we had cigar boxes filled with assorted wings and legs). Political vagaries seemed to us the work of incompetent French adults or, worse still, geometry teachers.

That was until my father — never mindful of the age of his listeners — explained what really happened at the Bay of Figs.

“Certainly it’s bad now between Persia and India,” he told us gravely, and we nodded. “But it is still nothing like the risk we ran at the Bay of Figs.”

Easily swayed by adults, Petie immediately wanted to know if Persia had big insects, but my father cut him off. “Watch for Karachi,” he told Petie laconically. “It has intentions. Maybe in 1962.”

Whereupon Petie began watching for Karachi — in fact, he named his cat Achi — in a vigil continued well past the summer.

But back to the Bay of Figs.

It was my father’s theory that cruel generals had started the Bay of Figs to embarrass the president. “Castro knows the truth,” he said. “The scheming goes up high. Don’t let the writers fool you. Think, boys, and you’ll understand.”

We were nine years old.

My father then retreated from the lounge chair into the house.

So we — well, Petie really — decided to think.

What thinking involved, he offered, was roughly similar to chasing after a brown squirrel — namely extreme concentration.

So where is the Bay of Figs? I asked Petie.

He thought for a moment, looking worshipfully at my father’s empty lounge chair.

“The Bay of Figs,” he announced, “is in Yeast Germany.”

And what happened there?

By this time Petie had warmed up. “OK. There was, like, a canal. And a dictator and generals all over the place. Which is when Castro thought he could be on the beach with his dogs… ”

In Yeast Germany? A canal? I could imagine only cupcakes and tap water.

Yes, Petie explained, Castro was confined to the canal beaches of Yeast Germany where he dwelled with a variety of big-tusked animals and defended the Bay of Figs from Persia and Karachi. Castro, Petie added for emphasis, was a tall man with bad ideas who spoke Spanish because he came from a jungle (this accounted for the big beard).

But how had America become involved with the bearded Castro and his alarming German canals?

Now that, said Petie, was a dumb question. Didn’t I know it was America’s job to protect the world? Didn’t I know how the communists were making salt water to drown us?

One night, Petie continued, patiently narrating to fill the extensive gaps in my knowledge, elite soldiers of the president had flown to the Bay of Figs with cans of special dark paint and attacked Castro and his dogs near the biggest Yeast German canal of all and fought all night near a big castle.

They lost! Live men were eaten in droves by Castro’s canal dogs at the Bay of Figs. Or they drowned in the communist water. Or got taken into the insect-ridden Spanish jungle.

And where, I asked, by now near tears, did that leave us in the world?

As Petie began gesticulating, my father reappeared on the porch. He answered the question summarily:

With summer school, he said.