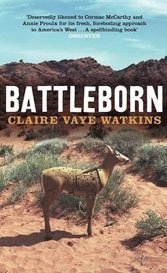 The introduction to Watkins’ debut story collection is Stephen Crane’s stark poem “In the Desert,” which promotes nostalgia’s appetite as a kind of cannibalism: “Because it is bitter, and because it is my heart.” Watkins’ fictional portrayals of her southwestern roots – she is from Nevada – are heartfelt and bitter just that self-devouring way, with living people pecked on by birds of prey.

There are 10 stories in this collection, and best are the personal ones, including “Ghosts, Cowboys,” a semi-autobiographical account of the author and her father, who procured women for homicidal cultist Charles Manson. Years later she lives with her half-sister, Razor Blade Baby, named that way because Manson sliced her mother open “from vagina to anus,” one death, one birth. Watkins’ unsentimental Nevada takes shape in this piece, but goes up a notch in “Rondin al Nido,” the confession of a teen girl named Lena whose path toward sexual initiation is a horror, as is her view of the world, and what she seeks from friendship is “Someone else willing to see the worst in the world.” But there’s method in this madness. Lena’s worse moment occurs in the summer of 2001, making her into a jaded savant immune to the events of that September, “as if she doesn’t know the instability of a tall tower, a city’s hunger for ruin.” It’s chilling juxtaposition.

In “The Past Perfect, the Past Continuous,” the gay manager of “The Cherry Patch Ranch,” a brothel, confronts his attraction to a disoriented Italian youth while a hooker named Darla cashes in on his naiveté. All this on a ranch that also houses wandering peacocks.

In “Wish You Were Here,” couple Carter and Marin slip off the rails when a baby arrives. Marin is “light with youth, with once-love, and also heavy with the disintegration of these.”

“The Archivist,” another melancholy foray, tells of Nat, who can’t get over her drug-addled ex-boyfriend (“A cokehead flimflam man who left me with a nicotine addiction and some trash from his pockets…). Nat, pregnant, has already had an abortion, but that means little to a Watkins character: “the whole experience was as awful as one would expect, and no more so. It was nothing I couldn’t do again.”

The desiccated Nevada landscape shrivels everything and everyone, including the aging miner in “Man-O-War,” who deludes himself into thinking he might save Magda, yet another dazed and pregnant woman. When Watkins focuses on these landscape casualties, she’s in her element. That’s less the case in “The Diggings,” a long and stylized gold rush recitation that takes up far too much acreage.

Overall, there’s plenty little mercy in the southwest of Watkins’ mind. Only dedication to the tidbits of compassion in the crevices gives her work some needed comfort.