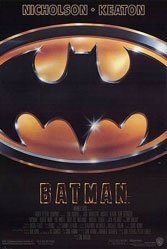 Few directors unsettled American popular mythology more than Tim Burton when he hauled a beloved if much-lampooned comic strip back to its more sinister roots. Developed in the 1930s by artist Bob Kane, Batman emerged from the flapper era and fascism, the Depression and gangsters, gutters and skyscrapers. But postwar optimism and anti-Communist caricature saw the hero stray from his roots. By the 1960s, he was the subject of a charmingly silly TV series that mocked itself. Audiences expected much of the same for the movie.

Burton had other ideas, brilliant ones. He cast handsome but ambiguous Michael Keaton as reluctant hero Bruce Wayne, the philanthropist-avenger, and picked Jack Nicholson to play The Joker, his Gotham City nemesis. Burton coaxed Keaton’s caginess and Nicholson’s outlandishness and set them loose in a bleak, decrepit city deeply influenced by Ridley Scott’s menacingly moody visions of outer and inner space (“Alien” and “Blade Runner”).

The beautiful twilight gave good and evil a coherent dimension in which the leads could frolic. It also allowed Burton to put thriller psychology ahead of comic book pacing. Keaton’s Wayne, whose serve-and-protect mission stems from the murder of his parents, is steely and unsentimental. Nicholson’s chemically deformed Jack Napier — hence The Joker — is lurid and weird. Sam Hamm’s mature screenplay, said Burton, was about “a fight between two disturbed people.”

While Kim Basinger is both pretty and effective as photo reporter Viki Vale and Jack Palance a perfect fit as crime boss Carl Grissom, all hinges on the believable war of nerves (and toys) between the two extraordinary eccentrics, one a casual playboy who masquerades seriously, the other a zealot obsessed by power. Burton’s much-criticized vision, always sprawling, threatening and thoroughly adult, opened a portal to later directors who refused to equate comic book story lines with infantilism.