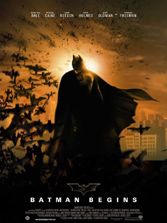 Christopher Nolan (“Memento,” “Insomnia”) nails this prequel by honoring the mood of Tim Burton’s original. Burton’s 1989 Batman was character-driven (Michael Keaton in the lead) and dark enough to elicit yelps from worried parents. Nolan, while not entirely humorless, ensures that his younger Batman (Christian Bale) is similarly complex. He’s a traumatized moralist who operates by rote in his efforts to reestablish his dead parents’ values. Like a worker ant, he builds his arsenal through industry. An in-form Liam Neeson generates the bad-guy pulse (“Now if you excuse me, I have a city to destroy.”), while Gary Oldman, Morgan Freeman and the sublime Michael Caine (a Cockney Alfred) provide quirky support.

Though the movie is ripped apart (inevitably) by sundry detonations and car chases it never sullies the essence of the comic strip: that Batman is foremost an action hero illusionist, a human redeemer whose weaknesses leave him well short superman status. Gotham’s rainy hues — Burton’s touch via Ridley Scott’s “Blade Runner” — are also restored.