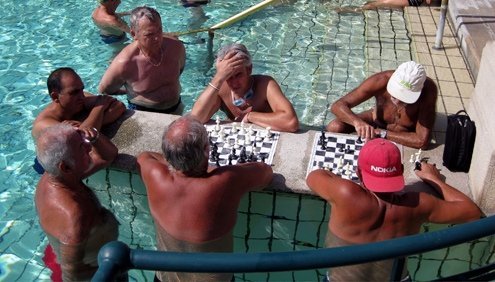 Chess players at the Széchenyi Baths. All photos by Ingrid Williams.
S

team rose up between rows of mahogany marble columns while soft murmurs echoed off the whitewashed walls. Beneath the mist, a glistening, pale-blue-tiled pool gurgled with softball-sized bubbles racing to the surface. In one corner, a cluster of plump, wrinkled Hungarian women in bathing caps suspiciously eyed each new bather like a pack of predatory cats. Under their icy stares, I slowly submerged myself into the tepid water, careful not to create any waves.

On this sweltering September afternoon, a soak in one of Budapest’s thermal baths was decidedly less refreshing than a cool dip in the Mediterranean back home in Italy. But as the sunlight filtered in through the skylights, casting a soft glow over the pool, it felt like bathing in a palace … albeit a very warm, humid palace.

When visiting a city that sits on 118 thermal springs, bathing in one of Budapest’s thermal spas is obligatory. Above the subway station in the city park, the sprawling thermal spa facilities at the Széchenyi Baths are a beginner-friendly place to test the waters, so to speak.

Inside, the grand 19th century complex houses a dozen thermal pools (in various sizes and shapes, with water temperatures ranging from 20 C to 40 C) and a labyrinth of steam rooms, one hotter than the next.

Outside, Hungarians of all ages and a generous smattering of tourists laze in the three enormous swimming pools (again, all heated to different temperatures) and on every surrounding surface.

For a country with no beaches, concrete is an acceptable substitute for sand when it comes to soaking up the scorching summer sun. In the warmest pool, next to a sign that recommends bathers stay in the water no more than 20 minutes, a cluster of old men intently play side-by-side games of chess.

Judging from the tan lines on their backs that end even with the water level, some of them have been submerged all summer.

Only two of Budapest’s thermal baths are genuine Turkish baths dating back to the 1500s, when the city was ruled by the Ottoman Empire. It wasn’t until the mid-1800s, when the city prospered as a powerful co-capital of the Austro-Hungarian Empire, that the grandest, most visually striking baths were built — along with most of the present-day city itself. The most magnificent of these baths — the Art Nouveau Gellért Baths — is like swimming in a spectacular cathedral with soaring ceilings, stained glass windows, marble columns, statues and intricate mosaics.

Throughout the rest of the city, the pervasive Austrian aesthetic is felt on the wide, tree-lined boulevards; in the stately, fin-de-siècle architecture; and at the ubiquitous cafés. Like their Viennese counterparts, Budapest’s traditional cafés serve coffee and pastries in elegantly decorated surroundings.

At the venerated Gerbeaud Café, the interior is as plush and refined as at Vienna’s Sacher Café. But disappointingly, none of the Gerbeaud cakes could compete with the decadent Sacher torte.

While Budapest’s traditional cafés hew close to their origins, the restaurant scene is thankfully evolving from the Soviet-era smoke-filled, goulash-and-schnitzel dives. Modern interpretations of traditional Hungarian cooking can now be found in stylishly designed — sometimes even smoke-free — settings. At the nouveau-Hungarian Café Kör, instead of the local specialty, meat wrapped in meat, I found succulent tangerine-marinated duck and washed it down with sweet Tokaji wine.

For a break from Hungarian fare (though nouveau, light it is not), the city’s emerging restaurant scene also produced some excellent Asian cuisine. In the tiny, sushi-bar-only-seating of Sushi An, the Hungarian sushi chef served up a fresh, tasty assortment of nigiri and maki. (Yes, a skilled Hungarian sushi chef; I had my doubts, but it’s true.) But the real gem and the only restaurant that truly earned its top-rated reputation was the chic, Asian-inspired Goa. With tables set out beneath the leafy trees of the main drag, Andrássy ut, it’s a see-and-be-seen sort of place that could easily be at home in New York, Paris or Stockholm.

The superb dinner of spicy cashew chicken and seared, sesame-crusted tuna, followed by heavenly chocolate lava cake, will not soon be forgotten. But even this fantastic, centrally-located, oft-lauded restaurant was not packed on a Saturday night, as it no doubt would have been in any other world-class city.

In stark contrast to Prague, where droves of tourists and stag parties pack the Old Town day and night, Budapest at times seemed all but deserted. Even during the day, few pedestrians roamed the main streets, the tourist attractions were rarely crowded, and reservations weren’t necessary at the most exclusive restaurants. Like a little boy who tries on his father’s suit, the physical size of Budapest seemed too large for the number of inhabitants. And the general malaise of the unsmiling, morose natives (Hungary has one of the highest suicide rates in the world) only reinforces this quiet. Still, on the tail end of the tourist season, I began to wonder: where was everyone?

As it turned out, Liszt Ferec tér was where everyone was — at least on this warm Saturday night. Buzzing with the late-night activity you’d expect to find in any cosmopolitan European city, a string of restaurants and cafés lined the wide sidewalks along the long sides of a leafy rectangular park. Every seat at every table at every café was packed with young Hungarians drinking, laughing and chain-smoking. I had finally found Budapest’s well-hidden heartbeat.

But at the stroke of midnight, the throngs of revelers abruptly dispersed into the night, leaving the square suddenly deserted. Waiters and waitresses began stacking the scattered, now-empty chairs while a handful of stragglers gulped down the last of their drinks. The spell had been broken, and as quiet swallowed the streets again, I too had no choice but to also head home.

The airport is 16 kilometers outside of Budapest proper. The low-cost option into the city via bus and metro takes about an hour. Take Bus 200, which departs between Terminals 2A and 2B, to the last stop, Köbánya-Kispest. From there, take the M3 (blue) metro into the city.

Be forewarned that the metro station is a rough-and-tumble sort of place, so those arriving after dark would do best taking a taxi from the airport. A taxi into the city should cost about 4,000 forint (about €16.50 at 241 forint to the euro). Bus and metro tickets each cost 270 forint, do not include transfers, and must be validated. Conductors often check tickets at the metro station exits (and are notoriously hard on tourists), so hold on to all tickets until you’ve exited the station at your destination.

When visiting the baths, bring a bathing suit, flip flops and a towel. For more information about Budapest’s thermal baths, including addresses and opening times, visit www.spasbudapest.com. More information about the Gellért Baths can also be found at www.gellertbath.com.