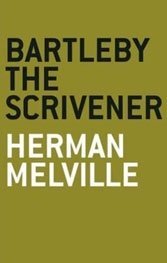 Imagine running a bustling law office on Wall Street and being badly in need of an additional clerk, in this case a copier, once known as a scrivener. So you, narrator — “an eminently safe man” — hire one. But what you see, an apparently capable if docile employee, is not at all what you get, a human disappearing act that goes by the name Bartleby and whose melancholy response to orders of any kind is: “I would prefer not to.”

While Melville’s 1853 novella-length dirge nibbles wickedly at the ghoulish, it never quite steps into Poe territory, instead offering a mysterious parable about ennui and the will to live, which Bartleby lacks. While the scrivener can write, and swiftly, he will do so only at his own behest. He eats little and soon comes to make the office his literal home. “Nothing so aggravates a person as a passive resistance,” insists the frustrated narrator, but that same resistance seen in a monk-like guise begs compassion, even pathos. The elderly employer wants to assist his “lean, penniless wight,” except that that the wight doesn’t prefer it. Nor will he confide. At the same time, his walking void status gives him a “wondrous ascendancy” over his bewitched employer, who struggles mightily with translucent Bartleby’s “mysterious purpose.”

Though casual readers associate Melville with the adventure-oriented bigness of “Moby-Dick,” it is deep space probes such as these, with man’s meaning unclear, that demonstrate his true ambition. Unfortunately, they also alienated a fan base eager for more clear-cut stories, pushing Melville into near-total obscurity.

Bartleby is at once a lunatic (before lunatics doubled as eccentrics), a depressive (before both depressives — and therapy — earned artistic applause), and a true alien (before aliens got a human face). He is a creature and creation who is “alone in the universe,” along with Melville’s gift.