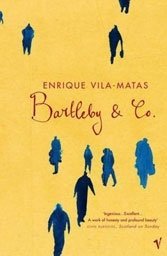 By Enrique Vila-Matas, translated from the Spanish by Jonathan Dunne

Author-turned-clerk Marcello is a Barcelona hunchback obsessed with chronicling the history of shut-in or shut down writers defeated by their life and craft, authors convinced that everything worth writing has been already written. Marcello calls the members of this resigned tribe Bartlebys, after Herman Melville’s sullen employee. If the quest sounds self-defeating, a tour through authors who did but now can’t or can but now won’t, it’s important to remember that behind this smarty-pants adventure lurks Catalan subversive Enrique Vila-Matas, an infinitely shrewd author who possesses whole beakers of overflowing Latin originality.

It’s no wonder then that this guidebook of recessive writers, “authors of the No,” as Marcello calls them, becomes an act of the “Yes,” a bugle burst of admiration for those willing to tackle words and thoughts in the first place. Silence, obfuscation, and self-conscious anonymity rarely stop the inky inchworm. “The fainting of the word” doesn’t condemn it.

Quasimodo Marcello, a marionette for Vila-Matas (little-known, sadly so, in the English-speaking world), examines celebrity naysayers on a list with the likes of Melville, Franz Kafka, Oscar Wilde, Samuel Beckett (Marcello calls himself AlmostWatt), J.D. Salinger and Robert Musil. But he also spends considerable time on a sprawl of lesser names. For comic effect, he cites fictional promoters of the “No,” including one Paranoid Pérez, a Spanish short story character who gives up writing because he’s convinced that Portuguese novelist Jose Saramago is mind-reading away his ideas. And Jacques Vaché, who calls art stupid and then kills himself, “the quick way of becoming an artist of silence.”

“There are as many writers as there are ways of abandoning literature,” mopes Marcello, who can’t seem to keep up with either the silent or the loud. But it’s Vila-Matas who gets the last laugh, since by encouraging “poor old and hunchbacked Spaniard” Marcello to scribble his “Notes of the No” he brings to light a number of obscure if not-so-silent authors and gives them that which they may or may not crave, an audience.