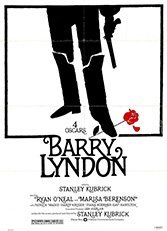 There has never been widespread debate over which of Stanley Kubrick’s films was his greatest comedy. This is largely because most would put his 1964 classic war satire “Dr. Strangelove or: How I Learned to Stop Worrying and Love the Bomb” in a league of its own. It’s also Kubrick’s only obvious out-and-out comedy.

That said, Kubrick’ sprawling, three-hour, 18th century epic “Barry Lyndon” may deserve another look. Released in 1975 to generally critical reviews, “Lyndon” is scathingly good at lampooning 18th– century British aristocracy.  This study of an inadequate man consumed by a desire to acquire and maintain prosperity and stature (earned or otherwise) fits right alongside “Dr. Strangelove” as one of the most intelligent period comedies of the 20th century.

The protagonist is Irishman Redmond Barry (Ryan O’Neal), whose marriage into the Lyndon family will give him the means to establish his social climbing character.

Early pm. After a brief and flirty romance, Redmond falls hopelessly in love with his cousin Nora (Gay Hamilton). Eventually, he challenges love rival, army captain John Quin (Leonard Rossiter) to a pistol duel. He is bullheaded and youthfully naïve, something to be expected of a confident young man with something to prove. Except that Barry is destined not to change.

10-year-old stepson. The little Lord sees Redmond Barry as an opportunist and a fake.  He is disgusted by “the lowness of his birth and the general brutality of his manners…”

This bitterly comic enmity comes to a head when Bullingdon (Leon Vitali) confronts Barry before a crowd of landed peers, branding him a cheating, low-class brute. Instead of attempting to disprove the youth’s claims, Barry lives up to them entirely by beating the spindly youngster mercilessly.

Many contemporary critics dismissed “Lyndon, excoriating O’Neal’s performance. While not a powerhouse actor, O’Neal is perfectly cast as Barry. His lack of emotional range superbly captures the character’s deliberate lack of emotional growth and missing maturity. The only times Barry shows emotion are in toddler-esque fits of anger or tears. As a man, he is a stunted creation.

Plot aside, Kubrick’s film is a masterwork. Filmed by candlelight, is spectacularly beautiful (which ironically may have contributed to its perception as as a dry and pretentious art film). The natural light and vast, hazy landscapes make this arguably the finest embodiment of the film phrase “every frame a painting.”

If ever there was one, this is a film that should be seen twice: first to acknowledge the cinematic beauty, second to appreciate the extraordinary character study.

Whether “Barry Lyndon” can be reclassified as a comedy (or social parody) is a personal choice, but it’s almost undoubtedly one of film’s great rise-and-fall fables, and among Kubrick’s most notable accomplishments.