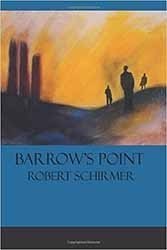 In “Barrow’s Point,” the fictional Wisconsin college town of Robert Schirmer’s powerful new novel, gay people are suddenly and strangely being murdered. Early on, the novel focuses on the killings and the police’s half-hearted investigation. But then, quite remarkably, the camera switches focus. Though the murders continue hovering uneasily in the background, the story of police officer Reed, his two younger brothers, and mother come to dominate the narrative.

In an original stroke, Schirmer juxtaposes horrifying (and most probably homophobic danger) and the threats and tensions that loom both within a family and in the confines of a town. The result is a novel of family, of town, and a murder mystery.

Two key subplots dominate. The first involves Reed’s wildly homophobic younger brother, Eddie and his flirtation with violent local teenagers who may or may not be involved with the murders. “A wall of membrane separated him [Eddie] from the world. His friends were leaning over him, yet they weren’t his friends. They were wearing flesh to conceal who they really were.” The second is a quasi love triangle between Reed, his partner Casey, and Casey’s wife Maggie, who just happens to have been Reed’s ex-girlfriend before he fully realized he was gay.

The plot lines slowly entwine, leading to a stunning conclusion in which the murders return to the foreground.

There are no real missteps in Schirmer’s masterful novel though the exact time period of the action doesn’t seem completely clear. References to Iraq suggest the recent past, but the excruciating homophobia doesn’t quite seem to suit contemporary America. But as the recent American presidential election suggests, prejudice may be far deeper than it seems.