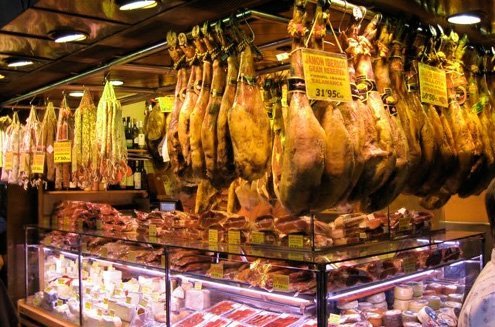 A jamón stall in La Boqueria. All photos by Ingrid Williams.
I

t was already dark by the time my husband and I arrived in Barcelona after a long day of waiting, hoping, and more waiting. At the airport in Pisa, there had been a strike (naturally). With fingers crossed, we sat in front of the departures monitor for what seemed like hours, watching as flight after flight changed from “on time” to “cancelled.” But then a check-in desk opened, a gate was assigned and we couldn’t believe our luck. While nearly every other flight was grounded, ours, inexplicably, was one that would actually take off. The Italian transportation system was not going to ruin this trip to Spain after all.

Four hours later, we squeezed our way into Bilbao Berria, a crowded spot in the Barri Gòtic district, for a few celebratory drinks. As I edged my way to the counter, instead of a bartender, I found the most lavish array of tapas spread out before me. The long wooden bar was lined with platter after platter of bite-sized treats, each speared with a toothpick for easy grabbing.

There were dozens of mouth-watering choices. Small pieces of bread were topped with things like spicy sausage, jamón iberico, cured salmon, cheeses, hot peppers, and caviar. Skewers of battered and fried fish, grilled fruit, and marinated tomatoes with cheese were piled high beside warm mini hamburgers, shots of cold gazpacho, and tiny dishes filled with layer cake and panna cotta.

With overflowing plates and cold Estrella beers, we giddily claimed a small corner table and settled in for our first round. As I later learned, local wisdom recommends sticking to wine or cava with your tapas, since beer tends to fill you up, leaving less room for the food. But with my mini burgers and fried shrimp, a cold beer was the perfect match.

On my first visit to Barcelona, I spent most of my time bouncing from one sight to the next. I craned my neck to admire Antoni Gaudí’s over-the-top, fantasy church-in-progress, the soaring La Sagrada Família. In the Picasso Museum, I wandered quietly from room to room through the interconnected stone mansions with an audio guide pressed tightly to my ear. And I took the requisite stroll down the main pedestrian drag, Las Ramblas, where street performers and sidewalk artists are the main attraction.

But it’s not the famous sights that keep pulling me back to Barcelona. It’s that tapas bar, that promise of the undiscovered: a bustling street-side café with pudding-thick hot chocolate, a tiny pastry shop with cakes lined up on the glass counter like jewels, or a hidden boutique stocked with hand-crafted shoes made by the same girl who’s selling them. Having checked off all of the must-sees on earlier trips, my most recent visit was devoted to exploring neighborhoods not on the typical tourist agenda.

Wandering along the dark, cobblestone alleys in El Raval, I was reminded of Manhattan, where there’s always a fresh, gentrification-still-in-progress neighborhood to explore.

Years ago, I happily traipsed through the unsavory meatpacking district and braved the sketchy edges of the East Village in pursuit of that same inimitable energy that now pulses through El Raval. Guidebooks may warn you about the area — prostitutes, drug dealers, and addicts still dominate the southern half of the neighborhood — but it’s where I’ve made some of my best Barcelona discoveries. The northern part of El Raval teems with tiny boutiques, colorful bars and cozy restaurants, all tucked away like little gems along the winding, shadowy streets.

While searching for a particular café, a wrong turn down a dark, cobblestone street instead led to a tiny boutique, windows aglow, with the most beautiful winter coat hanging inside. Upon closer inspection, it looked like something plucked from the pages of Vogue, but the label was an unknown local designer. Inside the boutique, the smiling shopkeeper cheerfully pulled out more stunning pieces to show me. Each was unique and beautiful — hand-stitched sweaters, tailored jackets lined in silk, and satin dresses with chic, unfinished hems.

Once back outside the tiny shop, another turn led to La Whiskería, a hole-in-the-wall bar with wooden barstools well worn from decades of use. Though just a few blocks from the touristy circus on Las Ramblas, the minty mojitos were cheap and the patrons were all locals. Here, the bartender spoke Spanish and Catalan, but not English. We ordered another round.

The next morning, under a brightly shining sun, we trekked up to the whimsical Parc Güell, Gaudí’s modernist fantasyland. The park is famous for a pair of unreal gingerbread-like houses that seem plucked from an acid-laced fairy tale and plopped on an otherwise ordinary street in the outskirts of Barcelona. High above the houses, fantastical, curvaceous mosaic benches ring a wide open area where groups of young Catalans relax in the sun, European tourists snap pictures, and everyone takes in the surrounding dreamscape. Climbing the path that winds up and around the hill brings thinner crowds and reveals panoramic views over the city, including the towering spires of the Sagrada Família and the equally tall construction cranes hovering nearby.

After a short subway ride, we were back in the bustle at the Mercat La Boqueria. There, we quickly figured out that a friendly smile could get you a free taste of jamón iberico from the many chatty meat vendors and butchers. After shuffling through the narrow aisles — where the piles of fruit were as colorful and beautifully presented as the stalls of candy and sweets — we maneuvered our way to seats at Bar Pinotxos to test the tasty seafood tapas like fried eel and mussels.

Refreshed and renewed, we wandered over to the medieval streets of El Born, where I was immediately drawn to the colorful dresses in the windows at Custo Barcelona. With their California-cool t-shirts and jersey dresses, Custo is the city’s biggest name in contemporary fashion and a refreshing rarity to my Gucci/Prada/Dolce-weary eyes. As I thumbed through the racks of psychedelic prints, I found the Holy Grail of fashion: a dress that I’m certain will work in every situation, from a big night out to a lazy day at the beach. Sold.

Just a few blocks away, 7 Portes may be a few decades past its peak, but the restaurant is still famous for its huge portions of outstanding seafood paella. Throughout the labyrinth of room, echoes of laughter resonate from the families and groups of friends sharing meals from giant, sizzling platters. After sitting down, our small table was quickly piled high with a bottle of wine, a basket of tomato bread, and a heaping caldron of rich, fragrant paella with seafood, chicken and sausage. Nearby, huge dishes of fried fish, mussels and shrimp were brought out in quick succession, but nothing smelled as divine as the steaming, saffron-scented rice on our plates.

A slow meander after dinner on the way back to our hotel took us past the Plaça del Bonsuccés. There, the leafy trees filtered the harsh streetlamp lights, which cast an eerie glow over the square. Even in the dim light, the nighttime energy was electric. Cafés spilled out onto the cobblestones in every direction with tables full of young Catalans catching up over a late dinners or early drinks. For those needing a gentle reminder of the area’s past, a handful of homeless men and their dogs had set up camp for the evening beneath marble columns on the edge of the square — but even they were cheerily passing a bottle of beer around. After one final nightcap, we crawled back to our hotel and into bed.

Every visit to Barcelona seems to end too soon. But before catching the bus to the airport on my last morning, I have a farewell ritual. Sitting outside Café Zurich on Plaça de Catalunya, with a sinfully rich hot chocolate and a flaky croissant, I watch the city come to life. Before I know it, the bus is whisking me away along L’Eixample’s wide boulevards past stately buildings, big-name shops, and — blink and you’ll miss it — the trippy, dream-like Gaudí masterpiece, Casa Batlló.

As other passengers strain to take one last photo through the smudged windows, I just close my eyes. There’s no need to soak up every last moment in Barcelona — I’ll be back soon.

The airport is located 10 km outside of Barcelona. Aerobús runs busses to Plaça de Catalunya every seven minutes. The trip takes about 30 minutes and tickets (bought onboard) cost €4,05 each way. The bus also makes stops at Estació de Sants, Plaça d’Espanya, and Universitat.

Ryanair flies from eleven locations in Italy to Girona-Costa Brava Airport, which is located 92 kilometers north of Barcelona.

To get to Parc Güell, take the L3 Metro line toward Canyelles and get off at Lesseps or Vallcarca. From the station, follow signs (or fellow tourists) to the park.