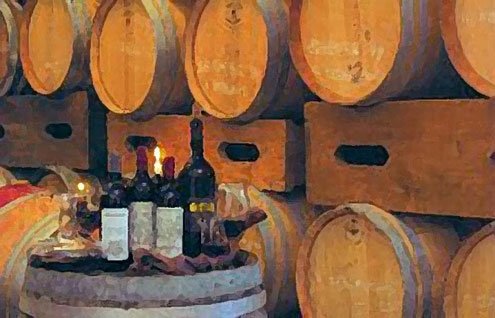 The Bricco Mondalino cellar.
I

talian wine seduced me in a Mary Poppins sort of way. One minute I was walking crisply along in my goal-oriented way, wearing sensible shoes and thinking clear thoughts. Next, I was jumping into sidewalk paintings, swirling and sniffing, and delighting in the crazy, fragmented, beautiful, rich, elegant world of Italian wine.

I moved to Milan six years ago to teach Italian university students, but the grapes kept calling. In January, I became a certified Italian sommelier. “Signora,” said of the head of the course, congratulating me after I’d passed the written and oral exams, “the only thing you lack now is experience so your job is to go out and taste as many wines as you can.”

But even tasting hundreds of wines will never allow me to say that I really know Italian wines. There are just too many producers, too many regions, and too many grape varieties. Instead, I have adopted a “boutique” approach.

At VinItaly, the enormous wine fair held every April in Verona, I was settling in one morning to taste in a small corner of the Piedmont pavilion when I heard a voice call out.

“Signora, come sta?” It was Mauro Gaudio, a tall, thin man in his late fifties who owns and runs Bricco Mondalino. (Bricco means highest point of the vineyard in the Piedmont dialect and Mondalino is a frazione, or hamlet, of the town of Vignale Monferrato). I had met him for the first time on a misty November morning last fall when I stopped in for an impromptu visit on the advice of a sommelier friend in Milan.

“Please come in and do a tasting.” He gestured toward a table and chairs.

As he laid out the glasses, I sat down. He began by pouring his Grignolino del Monferrato Casalese DOC, a nearly transparent ruby red wine with a dry, clean flavor, meant to be drunk young (one-to-three years). This is the rare red that goes well with white, flaky fish or shellfish.

He then poured the more structured, intense and tannic Gringolino “Bricco Mondalino” DOC, that can be drunk with a slightly heavier meal and is a “cru,” a wine made from grapes from a specific, high-altitude vineyard.

The concept of cru (basically the specific growth-place of a wine) originated in France but has since been adapted all around the world. The cru tradition is strong in Piedmont, where the relatively small size of vineyards, the microclimates, and strong family traditions are often compared to those of Burgundy.

But there’s one profound difference between the two regions. Burgundy is known for two predominant grape varieties, chardonnay and pinot noir, while Piedmont also grows many international varieties as well as a range of so-called vitigni autoctoni, or native grapes (40 are recognized officially but may actually be over 200).

There are simple, unstructured whites, for example cortese (Gavi DOCG) and arneis (Roero DOCG); lighter reds like grignolino, slightly heavier reds such as dolcetto, and even more robust reds such as barbera and freisa. Finally, there are the “big,” famous structured, nebbiolos (Barolo, Barbaresco, Ghemme, Gattinara, Roero DOCG and many DOCs).

Mauro poured three different versions of barbera, each produced differently. I remembered that when I visited Bricco Mondalino last November, I had found him alone in the cantina, waiting for malolactic fermentation to occur in his vats of barbera. He smiled broadly and all but danced around the cold cement floor while explaining his various vinification experiments, each dependant on how he had grown the grapes and in which vineyard — the family owns 45 acres in all. Now, I could taste the results.

His cru was the Barbera d’Asti “Il Bergantino” DOC made from 100 percent select barbera grapes. These came from the highest and oldest vineyard and had been aged a year in French barriques. The wine is an intense bricky red, robust but soft. It pairs best with red meat or game and can be served for up to 10 years.

His Barbera del Monferrato Superiore DOCG, made from 85 percent barbera grapes and 15 percent freisa, was aged instead for six months in large oak barrels. It is ruby red with a winey, young fruit taste that becomes more complex with time. It pairs well with red meat or aged cheese and holds its own for up to six years.

His favorite, the Barbera del Monferrato “Zerolegno” (“zero wood”) DOC is fermented in steel vats and aged in cement, not wood barrels. It has an intense violet color and a winey aroma with stronger tannins and a relatively low acidity. It is best with a hearty Piemontese meal and can be drunk for up to eight years.

Having said that, Robert Parker, known for giving 90+ scores on big and usually very expensive wines, scored these reasonably-priced wines (€8-€18) in the 87-89 range.

— On May 23, Slow Food is sponsoring a day in Monferrato for tasting Grignolino.