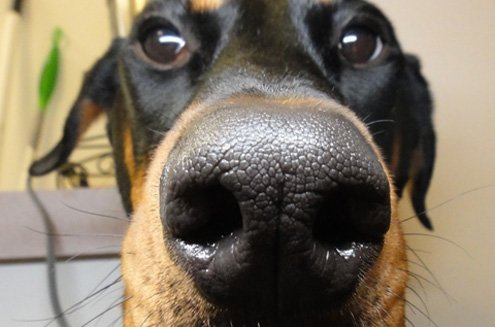 Oh, my darling, and she didn't mean me.
I

t took me an hour to get the dog home. I carried him up the four flights of stairs, set him on the doormat and rang the bell. Red yipped and whimpered and wagged his butt. A chain rattled and the door creaked open.

“Oh, my darling.” She didn’t mean me. She crouched and lifted him into her arms, planted a big fat kiss on his snout and sighed, “I’ve missed you.” She rocked him and damn near squeezed him to death. “Please, Peter, come in.”

I closed the door, hung my coat on a hook and followed her down the long hall to the kitchen where I found her setting out water and dog food.

I eyed Red’s dish on the counter. “Uhh…”

“Why don’t you open a bottle of wine?” She nodded at a rack jammed up against a wall. I chose a Barbera, rummaged in a drawer until I found a corkscrew and rounded up a couple of glasses. I poured and told her Red was a very fine hound.

“You’re welcome to walk him, whenever you like,” she said. “He seems so happy to be with you.” She got the water going in a pot on the stove, set a knife and a fistful of garlic on the table and settled into a chair.

I lifted my glass, nosed the wine. Hmm. Interesting. “To Red,” I said.

I took a sip. Not bad. I took another. Not bad at all. “Good stuff, Tina.” I set the glass down, picked up the bottle and had another good look at the label. Barbera d’Alba, 10 years old. “How was your day?”

A slow, sad smile washed over her face. “I spoke to Marco.”

“Yeah?” Marco had been dead for more than four years, but he and his mother still talked to each other, once in a blue moon or so. The signal was good and strong on his birthday, but certain factors could interfere. Stress. Static on the airwaves. Unspecified events beyond the pale. When she mentioned him it all came back, Marco and my wife and the night they died. Together. “What did he say?”

“He wants you to look at his files.”

A rush of adrenaline. “Files?”

Barbera’s generally pretty good. Reliable, it goes with pretty much anything — pasta, veal, cheese. From Piedmont originally, it’s a popular wine for restaurants and bars, and you won’t pay a fortune to get something drinkable. The one Tina had was better than that — a dense ruby color, not too much tannin and enough acid in it to cut through the crap I’d been hearing all day at a conference on tax evasion downtown.

I looked up to see her setting a plate in front of me. Spaghetti with garlic and olive oil, spiced up with red chili pepper. “Thanks,” I said. “Likewise.”

I poured another glass and asked her to tell me about the files. She drank, offered a worn-out smile, picked up a fork and told me the tale.

The pasta was great, hit the spot and made the wine even better.

The files? She hadn’t looked at them, not since the day Marco died. He’d been working on a story at the time, something to do with mules for hire, people carrying cash through the woods in the Alpine foothills north of Milan, up over the border into Switzerland.

The blowhards at the conference that afternoon had said that was all just a thing of the past. Italians these days paid their taxes, and the Swiss banks had mended their ways.

I threw a look at the dog, curled up on his bedding by the door. I’d left him in the office while I sat through the conference, picked him up afterwards and told him the story on the long way home. “Isn’t that right, Red?”

Red looked up, yipped, yawned and settled his head back down on his paws. Leave a poor dog alone, Pescatore.

“That’s simply not true.” Tina dropped a hand to the files. “Marco says it’s worse than ever now.”

I nodded, thanked her for the evening and promised to come and see her real soon.

She and Red saw me down the hall to the door.

The Barbera we drank at my neighbor’s that night was a Fagiani Barbera d’Alba DOC Superiore from 2005. Ten years had made the wine interesting, layered, the sort that makes for good company. Made by the brothers Boroli in Piedmont, a winery not far from Alba. Tina bought a case from L’Altro Vino on Viale Piave in Milan.