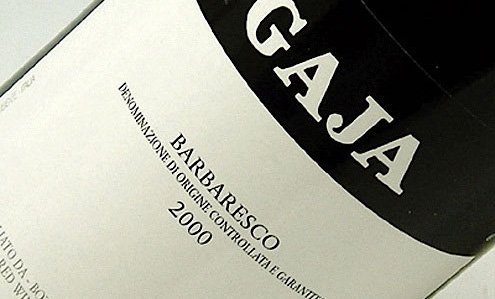 Barbaresco and cousin Barolo are the Piedmont's headline wines.
I

f I had just one bottle of Italian wine to impress a real wine buff, what would I pick? I’ve been asked this question twice over the last few months, and both times I gave some meandering answer about how there were too many good ones to pick just one Italian wine. But the more I thought about it the more I managed to settle on a single answer that satisfies me: Barbaresco.

I think I have a love affair with wines from Italy’s Piedmont region. Twelve months ago, I wrote a “Pane al Vino” column arguing that Piedmont’s Barbera was the quintessential Italian wine. For a quality quaffing red, a rich and lush Dolcetto is a great bet. And don’t forget Moscato d’Asti, a delicate and underappreciated dessert wine from the area. I’ve even had good crisp Chardonnay grown in the Piedmont, though it’s hard to find.

But Barbaresco and its cousin Barolo are the region’s headline wines. They are similar in a lot of ways: Both are completely made from Nebbiolo, a stubborn grape that in good years produces burly and earthy wines with a deep red color that isn’t the same grown anywhere else.

The Barbaresco and Barolo sub-regions are only a short and picturesque drive from each other, along the idyllic Tanaro River on either side of the village of Alba. Aside from being made entirely from grapes within that region, the rules on how the wine must be prepared are similar. Barolos spend a little more time ageing in oak barrels, and regulations governing yields and picking times vary slightly. But at their best, they occupy the same part of the palate.

The reason I prefer Barbaresco is consistency. The Barbaresco area is less than half the size of Barolo with barely a third of the production. Barolo is an area large enough to include a lot of second-rate producers riding the coattails of the region’s better producers. The standard in Barbaresco is just higher.

And the good news is that that high standard combined with vintages means you can almost just close your eyes and pick a Barbaresco and get something good. Most of the 2001 Barbarescos have arrived on enoteca shelves, and the early reports are that it’s an excellent year — it would probably be better regarded if the 2000s that are still widely available were not so close to perfect (one Italian wine critic opined that in 2000, everything that could go right that year went right in the Piedmont). Some Barbarescos from 2000 are among the world’s best wines that year.

But good Barbarescos also age very elegantly, and a string of strong vintages even before 2000 makes picking a bottle easy. If you are lucky enough to locate an older bottle pick with confidence for any year going back to 1995 (before that, though, the area suffered through a string of unfortunate crops between 1991 and 1994). It’s a rare wine that at its best gets better with age, but also drinks well when young. And it comes at a price that, while nobody would say is inexpensive, is often very reasonable given all the work and risk that goes into making the wine.

If it all sounds too good to be true, I should warn that for many people Barbaresco is an acquired taste (not for me — the first Barbaresco I had made me a fan of Italian wine for life). Most wine drinkers have grown to expect their reds to be silky and fruity, with soft tannins that make them easy to drink. But Barbaresco is a brawny bully of a wine, with enough acidity to make it a great match with most food dishes, and a kind of rich and round earthiness that is the foundation of the wine’s signature palate. Because of the wine’s boldness and high alcohol level, it’s a better fit for cool weather than it is for a lunch under the summer sun.

Even more than sticking with producers you know, set your sites on a Barbaresco produced in a single vineyard. That means the grapes for that wine were grown entirely within a specific patch of land the winemaker considers exceptional. The name of the vineyard should be written on the label. Also look for words like bric (which means “hilltop” in the local dialect) or sori (the word for “slope”), which can mean that the wines come from only that part of a single vineyard. In the Piedmont, you can usually guess that the smaller the area where the wine is made the better the wine will be.