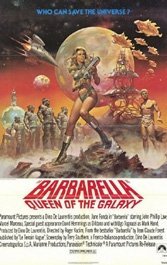 This space cadet movie (literally) must be seen to be believed. An emancipated super heroine takes to the galaxy to stop villain Durand-Durand (Milo O’Shea). Even the tagline is something of a marvel: “Who seduces an angel? Who strips in space? Who conveys love by hand? Who gives up the pill? Who takes sex to outer space? Who’s the girl of the 21st century? Who nearly dies of pleasure?” You guessed it, it’s our Queen of the Galaxy Jane. Who else is in the farce? None other than Marcel Marceau as Professor Ping. When was it made? When else but 1968.

Best question asked of space-vamp Barbarella: “Are you typical of Earth women?” Barbarella: “I’m about average.” And she hadn’t even started working out.