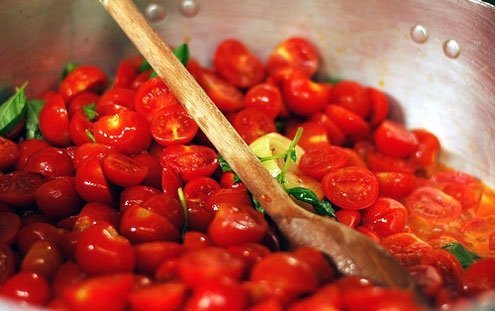 Whiz these pachini up in a blender with olive oil, a garlic clove, a sprig or two of mint and basil.
I

’ve somehow strayed from the subject of food lately. But with birds chirping and blossoms bursting, not to mention the bikini hanging on my refrigerator to inspire healthy eating, it’s time for me to urge you to bring spring to your kitchen by visiting your local open market.

Among my favorites is little-known agretti, an elusive edible plant (called a Samphire) found only in ditches near artichoke fields around Rome. Known as barba di frate (monk’s beard), agretti do in fact resemble long, green beards. You cut off and toss the little white and red stems and keep the tender green tops. Steam them for a few minutes in salted water and dress with good olive oil and lemon. I’ve tried for years to describe their taste to inquisitive visitors but each time I lapse into imprecision: “Sort of like beets, but not really. A little green bean flavor, but not completely… or maybe… well… just try them.”

Tiny, cherry-red tomatoes from Sicily have also pulled into town, looking every bit like little coaches for anyone who might choose to take a ride inside something red and delicious.

Whiz these pachini up in a blender with olive oil, a garlic clove, a sprig or two of mint and basil. Grab a handful of toasted almonds to toss in with the pasta. Any tomatoes will do, but these tiny delights are the crème de la crème of Italy’s spring wonders.

As I wander through Rome’s Campo de’ Fiori market, I often eavesdrop on tourists who stare baffled at puntarelle. Are they celery? Are they like the French favorite, frisée? And how did they get that way? If you look closely at a vegetable stand, you’ll usually see a mother, aunt or family member pushing the long stalks of what is actually a kind of chicory through a small, square wooden frame with a grid of strong metal wires. The wires cut the white hearts of the chicory base into little calamari-like shapes, which are then plunged into cold water for curling.

You can actually use frisée in a pinch, but nothing compares to tender new puntarelle tossed with a dressing made of olive oil, lemon, a tiny piece of garlic and salted anchovies. I use a hand blender to get a creamy texture before mixing with the puntarelle: the sauce is also excellent on pasta.

Another favorite of mine is the large, turban-shaped squash of deep mango color used for stuffing tortelli in northern Italy. I prefer to chop the peeled squash into cubes, brush them with olive oil, and roast in the oven until browned around the edges. You may also add diced potatoes to compliment this versatile vegetable.

An encounter with a kind old man on the road to Norma near Rome gave me new respect for wild asparagus. He had searched for them all morning perhaps, and when we stopped to ask where he had found them, he graciously offered us the whole bunch. As he was selling it in the market near by, we turned him down.

Rome markets often have a good facsimile of the rural kind with tiny, tender spears. I use them to make a simple omelet. I start with onion and asparagus, finely chopped and sautéed in olive oil. I then add the eggs and cook the mixture quickly so as not to lose the very delicate flavor.

Using larger, meatier asparagus, I begin the same way but cook the chopped asparagus a bit longer until tender. I then turn on my oven grill, break two (or four) eggs into a pan with the vegetables, add a little splash of white wine and cover for about three minutes. I remove the lid, sprinkle with parmesan, and place the pan under the broiler for another two minutes until the eggs are just set. I serve it with a squeeze of lemon.

Move fast on these spring delights. They don’t last. You’ll be back to root vegetables before you can say rutabaga.