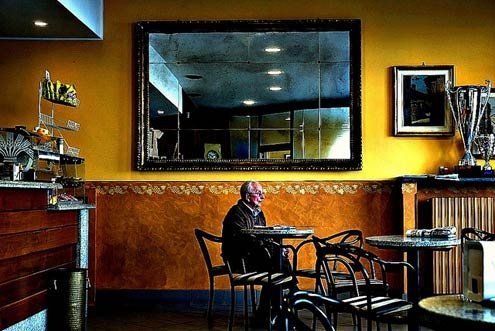 Suddenly, decades-old memories of Ugo and Egeria at their bar.
S

ome childhood memories never really go away. They linger in your unconscious until a scent or a taste teases them back into the forefront.

A few days ago, I was inside a bar with an assortment of cakes behind its pastry window. I immediately saw a maritozzo, or sweet bun, with cream. Until a few years ago, the maritozzo was Rome’s morning breakfast staple, a bit like donuts in the States or croissants in Paris.

Beginning in the early 20th-century, Romans ate sweet buns during Lent. Most were made with more or less the same kind of dough, and for most of the century they were packed with a thick whipped cream filling. Then, beginning about 20 years ago, came a slew of national ad campaigns focused on diets and healthy eating, along with low-calorie advice. Goodbye whipped cream.

The classic maritozzo is palm-sized and tapered, made from butter, flour, bread and yeast, and then brushed with sweet vanilla syrup, giving it an amber look. After the dough finished rising (before the dieting frenzy), pastry chefs would slice it open and literally slather in abundant amounts of handmade whipped cream. Put the likes of Reddi-wip out of your mind. This was the real thing.

When I was four, my family moved from Rome to Passoscuro, a small Lazio seaside town about 20 kilometers from the city. Every Saturday, my grandfather went to the Bar Egeria in front of our house and he’d get me a maritozzo with whipped cream, my weekly treat.

In those days, the Bar Egeria was basically a local hangout that sold gelato and basic necessities such as milk, oil, wine, water, butter and pasta. But it also had a billiards room. The walls were painted lime green and the space was square-shaped in typical Fascist-era style. On the walls were bunches of old photos of the owners as well as few posters of for popular brand name goods.

I remember ads for Brooklyn chewing gum, which was popular at the time. They showed the Brooklyn Bridge with a slogan that read Masticate La gomma del Ponte, which literally means, “Eat the bridge gum.” Steve Jobs might turn in his grave, but corny slogans worked, at least then. People bought the gum because they thought it was American-made, which the manufacturers played on for decades.

American GIs introduced chewing gum into Italian culture during World War II. Some people, including my grandfather, actually thought that chewing Brooklyn gum made you strong as a soldier. An Italian company made the gum, but I only found that out years later. If nothing else, the Brooklyn ad acted as a kind of lightening rod under which all sorts of people stopped to chat.

Ugo, the owner of the Bar Egeria, had named it after his wife. Egeria was a tall and shapely middle-aged brunette while Ugo was about half her size, with a long, curling mustache. Standing beside each other, they looked like a thumb and forefinger. She came from the north, he from the south. I think my grandfather had a thing for Egeria. Whenever she had something new to sell he was always first in line. So much so that Ugo would come around to monitor the exchange, usually making up some flimsy excuse.

I remember one day asking my grandmother casually how Ugo and Egeria had met. She was knitting at the time. “Because she was a whore!” said my grandmother, making sure my grandfather heard her. In those days you grew up fast. Family chatter was uncensored. Age didn’t matter.

After getting my Bar Egeria maritozzo, I’d scamper home and have my mother make me a cappuccino with mostly milk and a little coffee. I’d dip the maritozzo into the cappuccino, whose warmth melted fresh cream. Soon, my whole face was soaked white.

In Rome’s older bars you’ll sometimes see people ordering a cappuccino and maritozzo, obviously retracing childhood memories. Most will do as I did: Eagerly dip the whipped cream-rich maritozzo into the cappuccino. It’s a vintage rite.

But not all bars even carry maritozzo with cream. These days you’re often better off heading to a pastry shops. If you want heaven itself, drop by Trastevere’s Il Maritozzaro (Via Ettore Rolli, 50). They’ll give you the old school version.

If you’re too lazy to go out, here’s an Italian cake that’s easily made at home and great for breakfast.

— Grate the skin of a lemon into a bowl. Then cut the lemon in half and squeeze the lemon juice into the bowl. (If you prefer you can add orange zest and orange juice instead of lemon). Add 1 cup of milk. Then add 2 cups of flour (through a flour sieve) and 1/2 cup of cornstarch. Combine the wet and dry ingredients until mixed together. Add 1 tbsp. of baking powder. If the batter is too thick, you can add 1/4 cup of lukewarm water. Add 3/4 cup of dark chocolate chips.

— Preheat the oven to 350 degrees Fahrenheit. Grease and flour the bunt cake mold. Pour in the batter. Put in the hot oven and bake for 45-55 minutes.