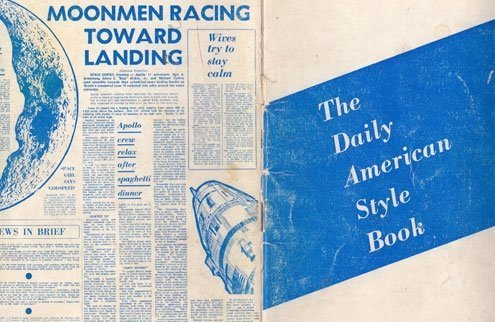 The 40-page Daily American stylebook was given to reporters and editors.
F

or most newspapers, stylebooks expressed manners, preferences and sensibility. They didn’t so much tell newly arrived reporters and editors what to do as what not to, as well as intimate a broader sense of journalistic etiquette.

Most papers had such a book. Those that didn’t hewed to style advanced by the Associated Press, tweaking AP suggestions to suit local prose mannerisms. The best stylebooks were also propaganda tracts of a sort, demanding not only a specific approach to the transmission of words and sentences but to life, base on syntax and brevity.

The Rome Daily American newspaper, founded after World War II by a group of GIs who had decided to stay in the capital, had its own such book, and a peculiar one. It was 40 pages long and, more than most such style guides, erred on the side of clarity and terseness, reasoning that some Italians would get their first exposure to English perusing its pages. “Newspaper style is as arbitrary as fashions in other fields,” the paper’s South African editor, Peter Reynolds, wrote in the 1969 introduction. “No style will please all readers, but lack of any style tends to confuse and irritate them.”

This linear, unifying approach to the presentation of prose has since vanished from much of the media world, which now tends to prize individuality of expression outside unified style. But Reynolds had a point. Readers were creatures of habit and different spellings and approaches to capitalization under a single newspaper roof seemed to suggest anarchy and take a swipe at overall credibility. Worse than bad style were typographical errors — but that’s a separate and more complicated story.

Two sections of the book were unusual in that they weren’t always present in American counterparts. The first was a chapter titled Clichés, which went straight to the point: “A cliché by definition is a bad thing.” It rued “verbose and facetious ways of saying things (conspicuous by its absence, tender mercies) and … phrases so threadbare that they cannot escape the suspicion of being used automatically (leave no stone unturned, acid test, psychological moment.)” The message was clear: avoid the hackneyed.

Perhaps more interesting was the subsequent chapter titled “Banned words,” a list of common clichés, tautologies and redundancies. The value of the chapter wasn’t in its scolding, but it its suggestions, which excerpts from the list suggest are as valuable now as the were at the height of the Cold War.

The following words and phrases are discouraged in the Daily American:

Freedom fighter when terrorist is meant People who hijack planes are also not commandos or guerrillas. These words have honorable connotations.

Veritable (as in veritable inferno).

Leaves much to be desired.

Despite the fact that (although).

Rushed to the hospital (taken).

Beautiful applied to any woman unless her beauty is universally acknowledged.

Monster (in reference to killers, rapists etc. This is the phrase Italians favor and we have occasionally followed suit).

Some of the banned words arose as a response to Pentagon language used during the Vietnam War, which in general tended to obscure rather than clarify (“escalate,” “maximize,” “situational awareness”), known collectively as “Pentagonese” (“state of the art” also emerged from the Pentagon cradle).

Other admonishments were far simpler and maintain their relevance. Among the banned words was “visualized,” which Reynolds suggested was just another way of saying “imagine” or “picture,” both more vivid and direct.

Finally, the book challenged slang. “There is nothing quite so offensive as dated slang and nothing quite so incomprehensible as new slang.” Today’s bloggers might take exception, but they have no stylebook to guide them.