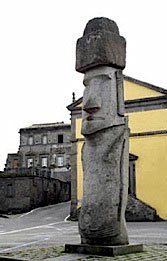 Moai had been a source of contention since his birth in Vitorchiano, a medieval town in Tuscia, a rugged stretch of Lazio that abuts Tuscany to the north and Umbria to the east.
Y

esterday, walking through the piazza in the town of Vitorchiano north of Rome I noticed that something — someone, I should say — was missing. The night had made off with Moai, the authentic Easter Island sculpture that for 17 years had kept vigil outside the town’s old gateway.

“What’s become of Moai?” I asked a shopkeeper, whose store stocks postcards of the now-missing monolith. “He’s in Sardinia for an exhibit,” responded the shopkeeper. “He’ll be back next year. But then they’ll be putting him out near the highway. “

I then felt a tug on my arm — a customer with a secret to share. “People didn’t want them to take him away,” he said. “They say he protects the town from misfortune. But they came with a crane and dismantled him.”

Now there was no doubt: Moai was indeed gone.

Moai had been a source of contention since his birth in Vitorchiano, a medieval town in Tuscia, a rugged stretch of Lazio that abuts Tuscany to the north and Umbria to the east. The area is steeped in mystical Etruscan lore. But Moai was no exotic souvenir. Improbably, he was created by visiting Easter Island sculptors and carved from local stone. His story is as intricately entwined in local legends as those of Archangel Michael or Saint Rose.

Situated near a canyon, Vitorchiano boasts one of Italy’s most beautifully preserved medieval centers. Its citizens are fiercely proud of their medieval heritage and religious and artistic traditions, stonework among them. For generations, quarrying and sculpture nurtured the area’s artisans. Their ancestors carved the famous fountains of nearby Villa Lante and the mysterious beasts of Bomarzo, which some theorize were designed by Michelangelo. Even the humblest village homes have exquisite stone decorations, though the art has been in decline for more than a decade.

Toward the end of 1980s, in response to a global appeal from Polynesian sculptors to help save decaying Easter Island statues, Vitorchiano’s carvers volunteered to chip in. To their surprise, they found that the Easter Island statues came from peperino, the same rock quarried in Vitorchiano. It’s a grey volcanic tufa peppered with black grains, a common building material in Italy.

Enter the Catholic Church and Italian television. Catholic missionaries in Rapa Nui (with ties to the town) and a Discovery-style TV program called “In Search of the Ark” sponsored a visit from a group of Easter Island sculptors to help draw attention to the plight of the Pacific statues. They decided to apply their skills locally to raise public awareness. A nearby quarry donated a huge chunk of stone and the Rapa Nui artists went to work on a statue using traditional methods and primitive tools.

The result was the imposing Moai, nearly four meters tall and carved from a single slab of grey peperino. He wore the ritual headdress that distinguishes many of his elegant Rapa Nui counterparts. The island artists then performed a ritual ceremony in which the Moai’s eyes were opened, endowing him with protective powers. With the mayor’s approval, he was raised in the town square. National television filmed the ceremony and the Easter Islanders departed soon thereafter.

Moai remained behind to testify to the solidarity among stone-workers, a link between two profoundly different communities that shared a way a life. The tolerance represented by the statue was remarkable in a community where even residents of neighboring towns are often considered “outsiders.” Under new and strict European Union immigration laws, it’s unlikely the Easter Islanders craftsmen would have been permitted into today’s Italy.

From the outset, some townsfolk saw Moai as an interloper. He usurped a place once occupied by a monument to the town’s war dead, which was moved across the street. Others insisted that a Polynesian sculpture had no business in an Italian civic setting. The resistance concealed deeper doubts, including religious embarrassment. Though his makers were Polynesian Catholics (Rapa Nui is a province of a deeply Catholic Chile) and guests of Vitorchiano’s Dehonian mission, the ritual of “the opening of the eyes” gave skeptics an opportunity to attack what they saw as a pagan monument.

Though the moai are often labeled as “heads,” they actually combine heads with abbreviated torsos. On Easter Island, they are thought to honor dead priests and ancients. Some think they help crops grow. Their influence was always viewed as anything but sinister. No one ever accused a moai of going bump in the night. Given such an exotic history, it’s no wonder Vitorchiano’s Moai fans numbered the superstitious and the wide-eyed, children in particular — in essence, those who relished the quirky and the fanciful. In this landlocked town, the incongruous statue evoked imagined sea voyages and exotic discoveries.

Outsiders who hear the story tend to side with Moai’s critics. What, detractors demanded to know, was an Easter Island statue doing outside the gates of a medieval Italian town with Christian roots? His defenders shot back that the spot he occupied was outside the medieval precinct and used mostly for parking. Nearby, a shopping mall is under construction. There’s a gas station, a bus stop, and a dumpster area. Moai was by far the friendliest of these sights.

Moai also gave his name to two cafés in town — “Bar del Moai” and “Mojito,” the latter combining a local craze for all things Hispanic with a pun on the statue’s name. Inscribed at his feet was a legend saying, “Touch his belly for good luck.” Taking visitors to visit the sculpture and stopping for a drink in the square was lazy Sunday entertainment. Now, puzzled visitors flock to the tobacco shop to buy postcards of a vanished monument.

For the moment Vitochiano’s Moai has been planted outside a museum in Sa Corona Arrùbia in Sardinia, where he is the centerpiece of an exhibit of Polynesian art. Maybe he’s happier overlooking the sparkling Mediterranean — an ideal environment for a statue of island ancestery. Perhaps he broods over his displacement and demotion from honored guest and goodwill ambassador to handsome exile.

In his old home, his absence is felt. “What will happen to the town now?” a troubled local man asked me. “Those people who made it really believed in what they were doing…”

And what about the statue’s protective powers? Townsfolk may have reason to worry. An online encyclopedia entry published by DeAgostini warns that the removal of a moai invites catastrophe.

The controversy even generated a response from the local priest. “As if our own protectors [the Virgin Mary and the Archangel Michael] were unable to shield us and were only good for inspiring festivals and processions,” he admonished unhappily in a parish newsletter. The message was clear. When it came to holy protection, local saints, not foreign icons, would take up the slack.

Once again, symbolism and not location seemed at the center of the debate. Changing views of non-Catholic beliefs as well as racial prejudice spurred by illegal immigration and a growing fear of fanaticism did poor Moai no good.

With Italy’s Asian population burgeoning, the town council faced a thorny question: “Do we really want a symbol of an Asian race and a Polynesian religion in the heart of our medieval town?”

Moai’s transfer suggests the answer was “no.”

There were also bureaucratic concerns. State officials noted that town officials had never registered the statue with the national archive of artworks and monuments. To them, Moai was a nobody, lacking pedigree and status as a work of art.

Go tell that to Sardinia, where local papers have hailed the Moai as “among the most famous of the Easter Island statues” and labeled him a cultural and financial treasure.

Transporting the artifact to Sardinia didn’t come cheaply and many now wonder who’ll pay the return ticket. Vitorchiano officials are hardly rolling out a welcome mat. The town council has ruled that Moai, should he return, will be relegated to a strip of land near a highway in the view of whizzing cars headed south toward Rome.

Will he be happy in a lonely corner far from the flux of town life? Perhaps his protective powers could be extended to shield motorists from the speed traps that notoriously dominate the highway. Meantime, the café in Vitorchiano’s square is closed for remodeling.

So don’t go looking for Moai postcards. The few that remained are sold out.

— In October, Linda Lappin reported the statue had not been returned to the town and the plaque that lay at its base had also been removed.