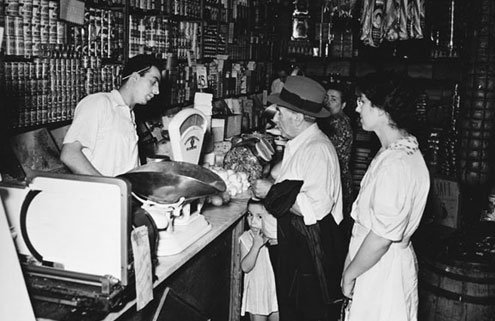 You're always Italian if your name says so.
I

stood in what should have been the vestibule of a bank, dumbfounded. I had wanted to walk in, withdraw money from the ATM inside, and leave. But I’m learning quickly that nothing’s that simple in Italy — at least for a straniera still learning to conjugate her verbs, to not put parmesan on every kind of pasta, and to never, ever, wash the espresso maker out with soap.

As I entered the bank, a glass door slid shut behind me. But the one in front didn’t open. And so now, instead of peacefully withdrawing my money inside, I was sealed in what looked more like a glass cylinder than a security vestibule. An airtight one, at that.

But nobody in the bank had seen me yet. Taking advantage of the rare moment of glass-enclosed privacy, I groped for a button. There was none. Were both doors automatic? But why weren’t they worki …

Just as I wondered whether to rap on the glass for help, the second door slid open. I took a deep breath, not sure whether to be grateful more for having been saved from asphyxiation-by-bank-vestibule or for the fact that none of the Italians inside had noticed my brief moment of foreigner’s panic. That’s when I realized that there weren’t any ATMs inside the bank.

Of course: Italian banks almost never have cash points inside. Back I went into the glass cylinder. Just testing this thing to see if it works, my manner said. No, I’m not just another confused American.

The bank’s guard grinned at me as I emerged onto the street. “Il Bancomat?” he said. “É qui.” He gestured to a machine just down from the entrance. “Ah,” I said, “grazie.” I’d fooled no one.

“Prego,” he replied. He kept smiling. “Da dove sei?” Where are you from?

Well, my father’s parents were both born in Italy.

I thought to myself, Davvero? Really? I’m Italian even though I was born and raised in the United States and feel very much like a foreigner, una straniera, particularly during labored conversation with locals at bus stops and at… banks.

But I was used to the reaction. Few methods seem better engineered to endear Italians to you than having a last name that ends in a vowel. Last names rarely bring comment in the U.S., no matter how exotic.

Travel outside of our hodgepodge of genes, cuisines and cultures, though, and the significance of names and heritage quickly becomes apparent. In England, nearly every time I signed my name I got a polite, “Oh, are you Italian?” — even though my accent was noticeably American (and to Brits, gratingly so.)

While an Italian name and heritage elicited mild curiosity in Britain, here they represent something of a bond. The guard’s smile contained a wink. Ah, sei italiana! Translation: Yes, of course, you clearly hail from elsewhere — not ideal. But look, you’re here now, there’s still a chance for you; after all, you’re still Italian. It’s in your blood. Just stop drinking cappuccino after noon, sí?

Proving your “Italianness” to Italians can be tricky if you don’t look the part or at least have the last name. You can speak fluent Italian, make a killer plate of penne all’arrabbiata, gesticulate with aplomb, enjoy the kind of network that allows you air-kisses and discounts at your local trattoria, but if you want to really be one of them, you’ll still have to battle the bureaucracy to stay on. (Or marry an Italian.)

But if you’re a foreigner who happens to have an Italian grandparent or two, it doesn’t matter whether you’ve ever even been here before. Sei italiana. More or less.

I fidgeted in front of the guard. How could I tell him it was different for Americans, that if we all identified ourselves along genealogical lines we’d hardly have a nation or a culture at all? How could I say that every moment in which I failed to grasp something as basic as the workings of a bank entrance contributed to my sense of feeling foreign?

I couldn’t. Instead, I did what any foreigner does to survive: I adapted. “Sono degli Stati Uniti,” I told the guard again, and before he could interrupt, “Ma sí, capisco. Sono italiana.”

He smiled, looking pleased. And with my American accent, walk, clothing, demeanor, upbringing, and my half-Italian blood, I continued toward the ATM.