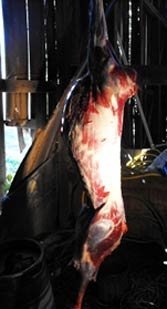 Thank god you're here! I need some muscle,
M

y uncle frantically emerges from the abyss of the garage. His lanky, white legs bob at the knee and his whole frame bounces, suggesting the demeanor of a little boy. The glitter in his eyes only enhances the impression. “Thank god you’re here!” he says exasperatedly, as if I was hours late to an appointment. “I need some muscle,” he says after a dramatic pause.

He looks like he’s just come back from jogging, or maybe not. He’s been wearing running clothes since I can remember: gray New Balances, nylon running shorts, higher up on the thigh than my dad likes me to wear. The rest of the outfit is an old threadbare t-shirt with sweat and wear holes and a paper-thin painter’s hat that covers his bald head. He wears it to keep his scalp from burning in the sun, but he’d never admit it since he insists he’s not bald. If any of us kids want to see bald, we should visit his older brother Bernie, he says.

I follow his pencil thin body into the darkness of the garage. Though he and my aunt have two cars, the two-car garage has always contained just one, and a beautiful three-man canoe propped up on sawhorses. The arrangement is telling: my uncle is a businessman by profession, a scientist by education, and an explorer by passion.

Typical requests and comments include:

“Help me spread the compost over the garden.”

“Don’t call anyone, we can drain the sewage field.”

“The sun’s up and the siding isn’t washed, hop to it!”

In the garage, my eyes adjust to the light. When they do I see another pair of bulging eyes. They are not human. It’s a dead deer. My uncle’s expression is absolutely stern, but his eyes are laughing. “So, you just hold it around the chest” he says matter-of-factly, “and I’ll tie the noose to the door runner.”

I notice now that the deer’s tongue hangs from its gaping mouth. Its organ-emptied ribcage is splayed apart and supported by a piece of two-by-four. “We’ve got to string up Bambi’s momma,” he whispers, struggling to suppress a smile, trying to make me squirm.

I decide to not to take the bait and help — without question or hesitation. I know that the slightest hesitation will trigger mockery. His niece “the turkey, the wussy, the sissy.”

I dutifully heave the deer, but fail on my first try. The rope breaks. I guess Mr. Scientist failed to calculate the animal’s weight against the strength of the line. He stares at the deer and then up at me, mustering the most humorless expression he can manage. He loves unexpected double-takes. He lifts his hat three inches with one hand and with the other he scratches his head, then tries combing the surviving wisps of hair.

I can tell he’s now deep in thought. He’s removed his big, self-made glasses and poises them on his forehead to massage the two red dents on the bridge of his nose. I recognize the trademark move. Abruptly the glasses are returned to their place and a new strategy is revealed. This time, the deer is quickly and efficiently hung.

When the time comes, he will cut, clean, and prepare the meat himself (with my aunt’s intervention). He eats almost only what he’s grown or killed. The meat he eats he likes to see alive before eating it. If forced to a restaurant, he sticks to white foods, breads and rice, potatoes, and some vegetables.

My uncle is not of the masses. He knows the calls of birds, studies logs, and listens to books on tape. On a trip to Iowa we listened to 10 tapes about the origin of oranges. For the return trip he promised a taped book with a twist, to add a little flavor to the monotony. He then solemnly displayed 10 tapes on the history of lemons. His humor is very dry.

In formulating this, imagine Henry David Thoreau in “Walden,” assuming Thoreau could have borrowed some of Twain’s humor.

My uncle sits emotionlessly through weddings, funerals, practical jokes, and family reunions. He wants us all to believe that he’s unfeeling rock. But those who love him know that he’s on the front lines of emotions, and that most battles — at least the hard ones — he’s trained himself to win in advance, usually with near absolute certainty and ease.