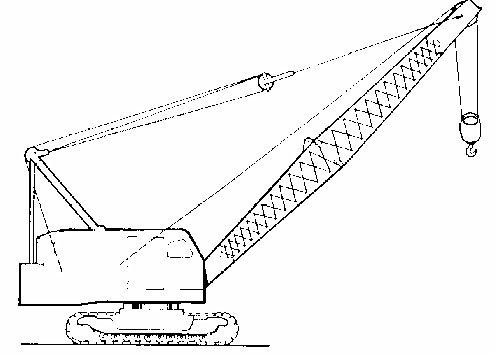 75 percent of the world’s cranes are located in Dubai. But anyone who lives in Spoleto knows that this can’t possibly be true...
U

nlike Rome or Naples, Spoleto is not the kind of place where you generally hear voices raised in anger in the street. On the contrary, the Spoletini are some of the quietest, most genteel folk you are ever likely to encounter. But everyone’s patience has its limits and there are signs that the veneer is beginning to crack.

This morning I woke to the sound of a furious argument beneath my bedroom window as the man who lives a few doors down — generally the epitome of politeness and wont to raise his hat to ladies as they pass — hurled a volley of abuse at the workmen trying to back their truck into our narrow alleyway. Surprised as I was, I couldn’t help but give a silent cheer as I listened to him fling a battery of colorful expletives at them. For most mornings, I, like everyone else who lives around here, am woken soon after dawn by shouts of “Left a bit, right a bit — not that way you cretino,” all yelled at full volume. The same truck parks so close to our front door that we have to squeeze in and out sideways. Everywhere you look in our apartment, there is a fine patina of dust. And as I set to work in my study each morning, it is to the accompaniment of an old Lucio Battisti song, whistled at a deafeningly high pitch by one of the workers. Maddeningly, he only knows one refrain, which he repeats over and over, all day long.

The statistics tell us that 75 percent of the world’s cranes are currently located in Dubai. But anyone who lives in Spoleto knows that this can’t possibly be true since most of them are here. As in many towns and villages in this part of Umbria, repair works on the ravages of the 1997 earthquake have been going on for what seems like forever. But this being Italy, just about everyone has jumped on the bandwagon, and with billions of euros pouring in from the EU and other munificent sources, there are now few buildings which don’t have scaffolding around them and/or a crane poised precariously overhead.

Adding to the mayhem is the Spoleto city council’s grandiose scheme to turn the entire centro storico into a pedestrian precinct. All of which means more works to burrow a network of escalators through the bowels of the city, designed to ferry people to various strategic points and back to their vehicles, left at car parks on the outskirts. On the face of it, the plan to ban cars from the city centre is laudable, and I am often the first to complain about traffic and exhaust fumes. Come to think of it, that’s one of the reasons I decided to leave Rome and move to Spoleto. But dust and noise aside, I, like many people who live here, am beginning to have second thoughts about the wisdom of the idea.

Already, bars and shops are closing down in the heart of the town, which is slowly starting to die from lack of passing trade. A friend of mine who ran a store selling hand-painted furniture and ceramics shut up shop for the last time a couple of months ago. She said she sometimes went a whole day without ever seeing anyone walk into her store. Many of the remaining shops have signs in the window, urging the council to rethink, and today most of them held a one-day strike in protest.

Ask most Spoletini, and they would willingly trade less smog for more business and the right to park near their homes. For as long as I have lived here, it has been a Herculean task to find a parking space anywhere near my apartment — I have been known to spend more than half an hour waiting like a vulture in the forlorn hope that someone will emerge and decide to take his car for a spin. Friends who come to stay have to lug their bags on foot about a kilometer up the hill as they don’t have a residents’ permit to drive into town. But I don’t even want to think what it will be like once the car ban is in place. Or how we’ll get our shopping back from the supermarket. For the time being, such is the volume of shouting, crashing and banging, that it’s hard to do much thinking at all, which is probably just as well. When will it all end? Not for at least a couple of years, we are told. But let’s look on the bright side. Maybe the builder working on the roof outside my study will have had time to learn the rest of that Lucio Battisti song by the time they pack up and go home for good.