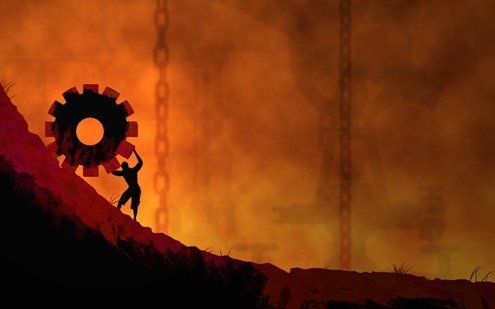 The horizontal Sisyphus bears the same burden as the one pushing uphill.
I

was hauling home two bags of groceries from the supermarket when an African vendor approached me on the sidewalk. I scowled but he persisted. My patience withered in a flash.

But he didn’t back away. Instead, his large nostrils flared.

“Chief,” he said, “I don’t come from this country, and I don’t get it, so maybe you can answer a question for me. Why is everyone so angry? Everyone’s angry. Not just you. Everyone.”

His wit caught me off guard, with no time to rehearse a reply.

“Listen,” I snapped. “I’m not from this country either, and I work for a living, just like you. But that’s not the point. The point is that I’m carrying two heavy bags. Why even pitch me? Why not just see that I’m carrying the bags, one in each hand, and move on to the next person?”

To this he nodded. “Yes, chief, I understand. You’re right. But you still haven’t told me why everyone’s so angry. I can see you have the bags, and I’d help you if I could, but I can’t, I have to work, but I can tell you’re still angry.”

A chance encounter between strangers in an impersonal city — which could be any city — was turning into actual human contact.

“Okay, you’re right,” I told him, suddenly deflated. “Maybe I’m angry, but not at you, so I’m sorry on that count. Let’s just get on with our days. I wish you a good day and good luck.”

I returned to all-at-once grim task of moving the bags, except that I now faced the unresolved matter of my anger.

Was I still angry at a Christmas lover who pretended girlfriend affection to pry loose stylish clothes? Manipulation is emotional leprosy, so yes. But not even memories of venality fully explained my sourness.

Was I possibly angry with the vendor himself, this stranger who’d wantonly intruded on my day? Had his chubby black face and random bluntness tapped into my hidden catalogue of biases? Was I responding not to the vendor but to the crowding fact of his worldly existence, a vaguely illegitimate presence compared to mine, bag-beholden but still somehow full-fledged?

Had the ongoing ugliness of the American presidential campaign made me into a Satanic caricature suited to the prescient 1976 movie “Network,” in which an apparently visionary anchorman tells his audience the world is rigged by thieves and fools and asks them to go to the window and shout aloud, “I’m mad as hell and I’m not going to take anymore…” — something most are more than glad to do. If only he weren’t a Van Gogh knockoff in the indiscriminate thrall of lunacy.

By the time I got home I felt like going back out to find vendor. Yes, I was angry, I wanted to tell him, and yes, he was right, so were many others. I’d suggest to him that maybe he should see resentment as a fashion statement. Maybe he’d even be wise to imagine the indigenous population of his strange new country as a people whose sense of purpose now arose as much from umbrage as empathy, with their messy narcissism and unchecked immodesty as newfangled badges of honor.

Maybe, I’d continue, the fact of having enough but always wanting more was at anger’s insatiable root, its source code of sorts — and hostility and irresoluteness essential to its writing. Or maybe it had something to do with the exaggerated traffic of life and its distracting congestion of choices. Heavy bags of food no longer signified glad means to stay alive, not even to me. They were just another weight, one that I carried forward like a tediously horizontal Sisyphus.

He had no such weight, I would tell him. His food probably still tasted good. He probably still greeted his fellows. Whatever his daily reversals, I’d insist, he should be glad for that. And replacing my scowl with a smile, I’d wish him well.