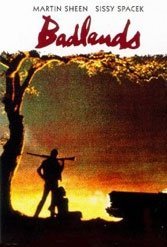 The yearning for holism that burdens most Malick’s later work is nowhere present in “Badlands,” a crisp and shiny red apple that is hands down his best film.

In the Dakota Badlands of the early 1960s, teenage Holly Sargis (Sissy Spacek) takes up with Kit Carruthers, a Jimmy Dean-style rebel (Martin Sheen), and the two elope into the wilderness. Not before wrong-side-of-the-tracks Kit guns down Holly’s disapproving father (Warren Oates). Theirs is a live for today pact, a dead-end Bonnie and Clyde run without the contrivance of banks and machine guns. Holly narrates the story with laconic directness; she’s in love with Kit until she’s not. Kit is a resourceful and overconfident wisecracker who kills when it suits him and saunters forward knowing from the start that he’s on borrowed time. Malick spices the run with Midwest landscapes, startled faces, and a stolen Cadillac Fleetwood seemingly engineered to kick up Jimmy Dean dust.

Malick doesn’t waste a second. Spacek’s dollhouse innocence and naiveté seem native the story, as if she’d been born into Holly. Sheen’s endearing and ruthless sides are Siamese twins, a grin their bridge. Ninety minutes is long enough to tell a beautiful tale about ephemeral love, reckless abandon, and the violence that can live at the core of optimism, a character trait Malik’s America both contains and encourages.

The script was based loosely on the story of Nebraska-born Charles Starkweather, who eloped with 14-year-old girlfriend Caril Ann Fugate in December 1957. The two then went on a two-month, three-state killing spree that left 11 people dead.