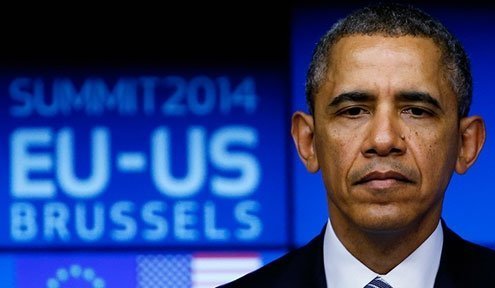 Rancorous insults do little to better a bad situation, and can trigger domestic resistance.
I

n speaking shrilly about Ukraine, both the president of the United States and the head of European Union have admonished Russia to pay attention to the century. This is 21st, they bark, as if the number alone possessed tempering magic, an inoculation against the two world wars that marred its lunatic predecessor, the 20th. But numerals can’t change the fact that the most substantial difference between the two centuries is that nuclear weapons have forced world war and global annihilation to share the same space.

For the West, the result is a confused state of affairs in which heckling “diplomacy” sounds as familiar as ever but lacks its traditionally cathartic (and lethal) follow-through, as if sturm had been surgically removed from drang, insults left to rot in their own juice.

Late last year, U.S. Secretary of State John Kerry responded to the Syrian government’s use of deadly gas by saying a “red line” had been crossed. He used pointedly 20th-century language that was once a precursor to hostilities. Syria was responsible for a moral obscenity that “we” — the world — could neither forgive nor forget. Regimes responsible for such acts, he added, had no right to govern.

It was “good war” propaganda intended to clear the way for reprisals in the same way Saddam Hussein’s bad character was mustered to rationalize the Iraq invasion after the collapse of the weapons of mass destruction pretext.

But Kerry spoke too soon. Russia, a Syrian ally, opposed preemptive strikes, as did a number of European nations, at least privately. U.S. rage was suddenly and embarrassingly spayed, a situation papered over by a Syrian pledge, brokered by Russia, to surrender its chemical weapons.

The fiasco underscored the limits of official indignation. Fulsome outcries may quench civil society’s need to vent (socially and publicly) but, because they are hollow, only magnify disbelief and resentment. The United States simply could not — and cannot — change the course of the Syrian civil war through rhetoric and the threat of punitive strikes. Actual follow-through would require a neo-colonial commitment the United States has repeatedly shown itself willing to trigger but not stick with, since transformation takes far longer than shock and awe.

Kerry modified his language and reluctantly agreed to the reasonable Russian middle path. Many chemical weapons have since been shipped out. At the same time, the obscene regime Kerry seemed determined to oust continues its despicable fight against an equally obscene opposition, as the “inexcusable” conflict — Kerry’s word again — enters its 37th month. Old school righteousness died on the vine, and Syria vanished from the mass media picture.

Eight months later, Russia lost its own cool when the elected president of neighboring Ukraine — an openly pro-Russian figure unfriendly to the EU — was toppled by civil unrest (undeniably emboldened by implicit Western support). Almost immediately, paranoid Moscow scurried to secure the Russian-rooted Crimean peninsula, where the Russian fleet also has its headquarters. It was a bloodless take-over justified by Moscow as a national security prerogative — Ukraine is Russia’s geographical Mexico — and made necessary by the chaos in Kiev. The move was dubious at best but hardly immoral.

That was not, of course, how the West saw it, since it had long been courting indebted Ukraine to join the EU, promising money and perks if it rejected Russia. The resulting crisis is part of a larger, post-Communist, Russo-Western chess match over the future of southeastern Europe and central Asia that represents this era’s version of the 19th-century Great Game, with China also in the equation.

Russia’s national body language was assertive, convincing, and uninterested in matters of sovereignty, typically putting its strategic interests first, all the more so because it has a long history with Ukraine. A willing Crimea was predictably and promptly annexed.

As with Syria, the U.S. and Europe soon found themselves where they still remain: adrift in bellicose platitudes bereft of substantive follow-through. Russian President Vladimir Putin has been called a megalomaniac, a warmonger, an invader; sanctions have been imposed (including a G7 suspension) and Russia mentioned as a rogue state, a brutish weakling, a pauper in king’s clothing — dangerous charges since Russia is still xenophobic enough to take lasting national offense, rallying even Putin dissenters and recharging old misunderstandings. Moreover, telling Russia that its actions are out of step with Century 21 by using the threatening language of Century 20 is tantamount to decrying traffic while leaning on a car horn. Knowing this, “rogue” Russia has mostly kept its own volume down, keeping all diplomatic channels open. Already in control of Crimea, it has nothing to gain from returning fire, leaving the bewildered U.S. to press ahead with knee-jerk warnings about Russia’s “dark impulses” and to suggest, speciously, that Moscow’s Crimean action could presage an invasion of the whole Ukraine and even an attempt to get back former Soviet Bloc nations such as Poland and the Baltic States.

Such agitprop was once disseminated to push a loathed rival over the edge, and into war. Now, it is little more than 20th-century sputum to offset 21st-century dentures, since 21st-century Allies will not (and cannot) trigger 20th-century brawls. The stakes are too high. Thus the verbal sparring continues unabated, as if words alone did no harm, but they do, sharpening the cuticles of rancor and keeping all reasonableness out of the picture.