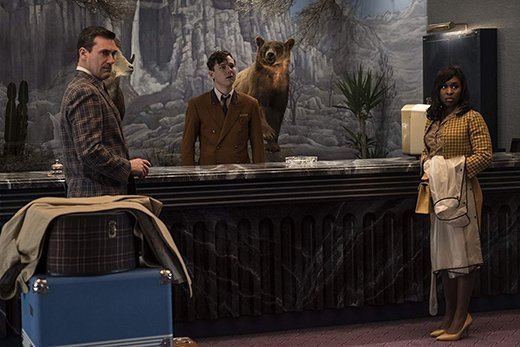 Expressions on the faces of actors Jon Hamm, Lewis Pullman and Cynthia Ervio suggest grizzly times to come at the El Royale Motel, in a film that doesn't live up to its potential.
T

here is reason to believe that 2018’s “Bad Times” could have been a very good film. The contained, isolated setting (think “The Shining”) is worthy: a stylish mid-century motel, once a haven for gamblers and the Rat Pack, and the site, as it turns out, of perverse activity. The motel is empty as the film opens, its gambling license gone, its only employee the meek Miles Miller (Lewis Pullman).

Time will reveal that there’s more to Miles than meets the eye, and the same could be said of three of the four guests, unknown to each other, who arrive on the same day in 1966. Laramie Seymour Sullivan/Dwight Broadbeck (Jon Hamm) appears to be a smooth-talking vacuum cleaner sales manager; Father Daniel Flynn/Dock O’Kelly (Jeff Bridges) appears to be a humble priest; Emily Summerspring (Dakota Johnson), a tough-talking hippie-chick, appears to be alone and later appears to be a kidnapper. Only Darlene Sweet (Cynthia Erivo) is essentially what she seems to be—a talented soul singer — and Darlene’s centeredness marks her as the film’s uncompromised ethical core.

Two additional characters — Emily’s younger sister, Rose Summerspring (Cailee Spaeny) and Billy Lee (Chris Hemsworth, of Avenger Thor fame) also are what they seem to be: Rose is the proverbial “bad seed,” Billy a vicious, manipulative, Manson-like cult guru with a pretty face and Baywatch body. Significantly, only Billy lacks a back story (indeed, even the El Royale has a back story); he’s so evil we don’t want to risk the empathy that understanding his back story might induce.

“Bad Times” has other virtues. Like Quentin Tarantino’s 1994 “Pulp Fiction,” it employs time as a creative device, moving between past and present in clever and revealing ways. Space is important, because the motel, like the guests, isn’t what it seems to be. The use of surveillance as a plot device has current resonance. Music is critical, too; tunes played on a prominent 50s-style jukebox ground the production in time, and Darlene’s lovely, Whitney Houston-like voice (and song selections) emphasizes her moral authority. Erivo is a British Broadway star who was deservedly nominated for several awards for her performance in the film.

Writer-director Drew Goddard’s ensemble-cast feature is set in a motel on the California-Nevada state line.

“Bad Times” even has a theme, an idea that runs through it from beginning to end. That theme is choice, and it’s introduced early on, when Miles explains to the new arrivals that the El Royale sits on the border between California and Nevada, and that the guests can choose a room in either state—“hope and opportunity to the East, warmth and sunshine to the West”–descriptions that seem to reverse the state stereotypes and ironize the idea of informed choice. Of the guests, only two want a particular room, and one of them chooses the wrong one (Nevada, Room 4), with fateful consequences. The jukebox also serves as a metaphor for choice.

Later, we learn that Darlene’s back story includes a moral decision that continues to shape her career, and that Father Flynn, while no angel, once demonstrated the capacity for moral choice. In real time, Broadbeck’s decision, to defy his powerful boss and go to the aid of someone in distress, ends “badly.” Curiously, the same could be said of Emily, who outwardly appears hardened and unscrupulous. And Miles (convincingly portrayed by Pullman) displays enormous personal courage in transcending his horrific Vietnam War experience. The ensemble cast is good at drawing out the theme, but it’s the lesser-known actors – Erivo and Pullman – who rise above the rest.

“Bad Times” is director and writer Drew Goddard’s second feature — his first was the 2011 horror film “Cabin in the Woods” — and he’s a veteran of TV horror. His background may be one reason the film’s virtues are overwhelmed, and the theme of choice corrupted, in a final act that takes up nearly a third of the 141-minute running time. The agent of its demise is the none-too-bright nor charismatic cult leader Billy, who arrives at the hotel as a fully armed and escorted, self-proclaimed advocate of moral choice, though his idea of morality has already been revealed to be at best simplistic, at worst stupid and vile. At the El Royale, Billy defines choice as something like Russian roulette. His teen lover Rose joins in the fun. Not everyone dies, but there’s enough killing to vitiate the strengths and subtleties of “Bad Times”—that is, to damage what could have been a very good film.