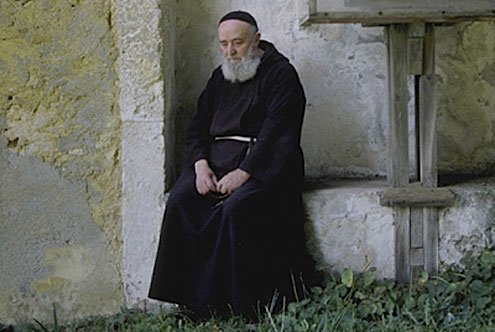 A bumptious priest refused to let my sleeping 18-month-old child into the Abbey of Montecassino.
I

t is no secret that the Church is less than thrilled by widespread predictions that Islam will overtake Christianity at some stage this century. The Catholic Church is known to be particularly jittery about the prospect, aware that its own congregations are dwindling fast, especially in Europe and the United States.

So you might think that the people in charge would do something to try to reverse the trend and attract more clients — maybe launch a PR strategy or send the clergy to charm schools. To put it bluntly, the official face of the Church is often a singularly unfriendly one. To put it even more bluntly, many church officials don’t do themselves or their cause any favors.

Like the time a bumptious priest refused to let my sleeping 18-month-old child into the Abbey of Montecassino because his (rubber-wheeled) pushchair might damage the marble floors. “You can come in but you’ll have to leave him outside,” he said unhelpfully. My very Catholic aunt was highly indignant and announced she would take the matter up with the pope.

The nuns at my school weren’t exactly the most charitable characters either. One of them delighted in giving us detentions on Saturday mornings so we would have to come in and clean the loos. Another took bizarre pleasure in making us kneel on hard floors to see whether our skirts touched the ground and if they were the regulation length. And the only time I ever saw my dour headmistress smile was when she announced to an appalled audience at assembly that a girl in the sixth form had decided to become a nun. And what about the charmless and eerily Chaucerian priest who presided over the diocese where my husband and I decided to get married in Umbria? He did everything in his power to dissuade us, assuring us that “mixed marriages never work.”

More recently, I again had cause to wonder about the Church’s dubious personnel training methods during an encounter in the middle of the Umbrian countryside. With a group of friends — all of them Italians and Catholic (bar myself) — I set out on horseback to a country chapel, an annual ritual that involves an open-air service followed by a very jolly get-together where villagers distribute wine and biscuits to celebrate the local patron saint.

As always, we remained quietly in the background, but it soon became apparent that the Polish priest conducting the service was not in a good mood. “Shhhhhh,” he hissed at one unfortunate villager, who was clutching his infant son and occasionally murmuring to keep him still. “If you can’t be quiet, go away. This isn’t a picnic!” snapped the priest. I thought that was a bit rich, and probably rather shortsighted given that the villager singled out for the very public rebuke was one of the few members of the congregation under 70.

But worse was yet to come. At the end of the service, the priest rounded on us and said we were not welcome. Now I am the first to accept that this priest may have been having a bad day and was quite simply out of sorts. But I suspect he failed to think through the consequences of his rude and unpleasant outburst. Most of our party, deeply offended, rode off muttering darkly under their breath. The old codgers who made up the bulk of the tiny congregation, and the few children with them, looked horrified as we trooped off. Some of them came after us to apologize, and one old fellow almost tearfully tried to extract a promise that we would come again next year regardless. In one fell swoop, this priest had ruined a wonderful event and soured a whole community. He had also, I suspect, helped to quicken the now inevitable decline of the Church by whittling away at one of the last remaining cores of belief, and church attendance.

The fact that the priest was Polish does of course speak volumes about the state of the Catholic Church in much of Italy and other parts of Europe. In Italy, fewer and fewer young men and women are coming forward to take the cloth, especially in country areas where a priest may have to serve several parishes and tear around madly trying to say mass for small groups of villagers. But surely that does not give priests from other countries the right to trample on local people’s toes and treat them like naughty children? As any immigrant knows, being a foreigner is not an easy role to play and there is a fine line to be drawn between integrating into the host country and remembering that one is, at the end of the day, a guest there.