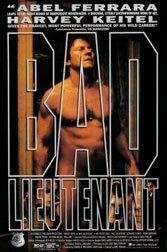 Keitel’s bigoted lieutenant is introduced as a disinterested family man who spends most of his “working” hours betting on baseball (again his own team, or himself), mainlining crack, boozing, and meeting his sexual needs as he can. He’s repressed abuser of every known substance, including his downward spiraling self. He rambles through a primal story in a howling trance: “No one can kill me. I’m blessed. I’m a fucking Catholic.”

But the rape of a young virgin nun not only arouses him but pushes him into religious hallucinations in which Christ appears. Christ but not forgiveness. Nor are bookies forgiving. And the dye is cast.

Ferrara’s guilt imagery is heavy-handed at times and Keitel’s burdening ache hardly in need of assists from nun-inspired visions. That said, the film is an X-ray of a lost and malignant man caught in a cesspool of his own making. Written by actress-model Zoë Lund, who died of a cocaine overdose in 1999.