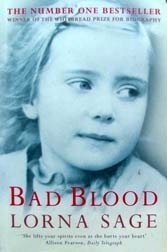 “Bad Blood,” the title a growing-up memoir by (now deceased) literary critic and feminist champion Lorna Sage, has a double meaning: Bad blood as in lingering antipathy and bad blood as in a primitive explanation of some families’ curses — In this case those of disruptive sexual impulses and troubled social adjustment.

While some of the bad blood is strictly personal, much of it is also historical and contextual. Sage grows up in Wales, after World War II, when rationing and austerity exacerbate the grinding poverty and rigid social structures of the village where her grandfather is vicar. Her grandparents’ relationship, which is deformed by obvious incompatibility and her grandfather’s extra-marital relationships overshadows her own mother’s role and Sage spends her early years as a near-feral child wandering the nearby woods and reading. Later, the apparent normality of a new council house liberates her from the dirt and gloom of the vicarage, while underlining the difficulties that her multi-generational family has adapting.

The 1960s arrive, upending sexual mores and social hierarchies. It seems fatuous to marvel, but it is only a sign of what progress has indeed been made, that Sage, who gets pregnant at 16 manages to carry on and enter university, although the latter required special dispensation. Married students were not allowed.

The writing has its brilliant moments, but Sage, a well-known essayist, has trouble maintaining the tension. Sage’s descriptions of post-war Britain and the difficult conditions women faced are vivid but her reading of her grandfather’s diary, while helpful to the author in setting her own pieces straight, grows repetitive. Still, teenage girls who take it all for granted should read this book.