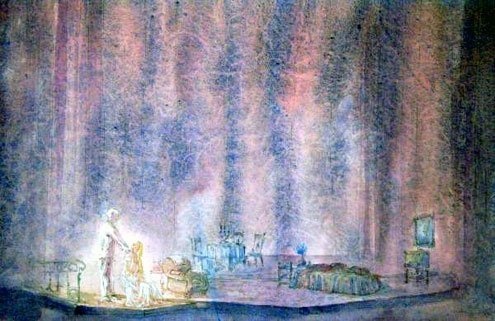 You are magical...
R

ehearsing for an American play in Rome, we four actors created a family. Our stage roles were as follows: Younger Sister (me), Older Sister, Boy love interest, and British Dad. Under the lights we knew lines, screamed at each other on cue, and made out according to script.

Backstage was another story. We were kooky and rapt.

Older Sister, an uptight currency analyst in the show, was actually a free-spirited Californian who swore by new-age energy, herbal remedies, and horoscopes (“We can’t have our show that weekend — it’s a bad horoscope weekend!”).

Before the show, as Dad and Boy changed and stretched, Older Sister took out two chimes and gonged them against each other. Chimes in hand, she belled through the open spaces of the theater, up on the seats, around the light box, backstage, and over the director’s upright body (“Hon, you are tight around your pelvis.”)

She said she was cleaning the air.

I wondered if I should be more open to new age remedies. I also wondered when the noise would stop. Then again, I’m probably tight around my pelvis.

Now it was Boy’s turn. He explained he had no love for shopping mall multinationals. “Costco is evil,” he announced. “Big box stores like Costco and Wal-Mart are ruining the world.”

The sisters vehemently disagreed. “Costco and Wal-Mart aren’t the same thing.” Boy mentioned that, by the way, he’d never been inside a Costco, but was still sure it was evil.

I, Younger Sister, put my clothes in organized piles along the backstage wall. I studied my meticulous notes to match outfits to scene, so that I could have them in schematic order. My reward was peppermint lifesavers from Boy. We shared them with the others. Yum.

Dad and Boy then fell into a relaxed chat about music. Older Sister and I marveled that they could be so normal and at ease. After all, curtain time loomed.

The director, her pelvis newly freed by the gongs, entered backstage to tell us we had five minutes to curtain. “Balls out, okay? Cool beans. You are all magical!”

Older Sister gave a scientific definition of “balls out” and “cool beans” to which Dad just shook his head, apparently wondering how he’d ended up with such strange Americans.

We were getting jittery. The house was opening. People filed in and we recognized some of the laughs. Friends.

Big Sister passed around drops of lavender oil. She squeezed a few drops under Boy and Dad’s tongues. I turned her down. I didn’t want to be turned into a flower or have an allergic reaction.

We laughed until Boy said, “Get depressed!”

NOW, IT’S TIME to get into character. We’re about to start.

We give each other big hugs and then cocoon ourselves in the silence of our own worlds before the houselights dim and the show begins.

Dad works silently, seated at the backstage table over his mathematical notebook, which he fills with real math and stories. That’s his role.

Boy is supposed to have a similarly intelligent mathematical notebook and shows it to me onstage. “Your Dad was a genius!” He holds up a drawing in the notebook of a skyscraper and then another of a flying chicken. My eyes well up with tears as I try not to laugh. He got me again.

Older Sister changes backstage. Red bra today. I always seem to walk in on her when she is changing.

“I can’t find my notebook,” Boy whispers to me before we go onstage. I wonder where it is and what to do if we can’t find it. I think it must be with his papers until he reminds me I was the last to have it. As it turns out, it’s hidden under my piles of clothes. So much for my superb organization.

Another quick backstage change in the dark. Older Sister curses under her breath. She’s put on my jeans. She’s about a foot taller than I am. I suppress a laugh at the thought of her in the jeans, though I can’t see her in the dark. I hand her the prop purse before she exits onstage.

“Catherine?” Boy is looking for me and calling me as he walks onstage. Trying not to ruin his concentration, I cling to the stone wall as he passes me backstage. He’s not supposed to see me.

Director comes back and tells us that we are magical and she loves us.

Big Sister and I change and go to the bathroom together, vaguely disguised in hooded sweatshirts. We leave the safety of backstage holding hands. Dad chuckles at our girlie bathroom breaks.

Intermission is long, and we pace backstage, mentioning a few lines we missed, what we’ll do better next time, unexpected audience reactions. We then fall into silence at our posts, caged animals waiting for the dimming of the lights and the second act.

Now, the matinee show is over. The evening show is about to start.

Boy tells me he’s lost the notebook again. Who had it last? Very diplomatic, as I again had it last. I left it on a table backstage. I retrieve it, and we all share some lifesavers and a few jokes.

The director returns and tells us we are all magical. The house lights dim and we’re ready to go again.