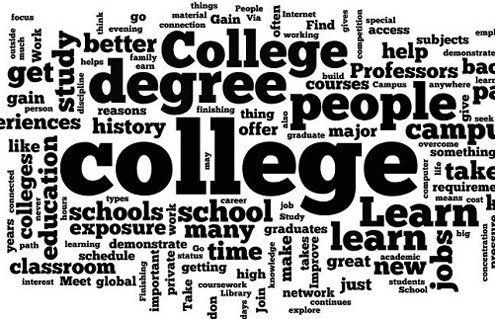 Leaning about the many possible meanings of education can take years.
L

ike most things, it started when I turned 18. Other people were doing it so why not me? I’m not talking about drinking at high school parties (my naiveté was startling — I never went to one), but about going from high school to college. My parents, like many American middle-class parents, expected that’s just what I’d do. It was seen as part of a natural progression from college to career to marriage to children.

But in the small Michigan town where I grew up, college was not the norm, and my town isn’t alone. According to recent figures from the National Center for Education Statistics, only 33.5 percent of Americans between ages 25 and 29 even have a bachelor’s degree (it varies by states, with more women holding degrees than men). In those internet-less days, my college options were limited to where my immediate friends were going, to Michigan State University, which was also where my father’s alma mater.

So I applied to and got into Michigan State where I majored in child development. I made the Dean’s List each semester. At that point, my goal of becoming an early elementary school teacher seemed like a straight shot, no bumps in sight.

Then my life took me for a ride (if you want the details, come to Rome and get me talking over a bottle of wine). The straight track, the only one I’d ever known, was suddenly blown to bits. I dropped out at the start of my senior year, saved money, and left the country on a one-way ticket bound for Europe.

My parents were furious enough when I dropped out of school. When I left the country they were stunned. But dropping out and leaving wasn’t about their dreams and expectations for me, but about me and my finding my own way. It was also about discovering the self that lay buried beneath their expectations and letting that self come to the surface and see what it say for itself.

In the years that followed, I traveled and read. As my journey progressed I began believing that true education was never meant to be pent-up in a classroom, where students passively receive what teachers give. Instead, education was the active discovery of people, places and cultures. It was a natural result of curiosity, of being in the world, and trying to be conscious of one’s place in it. It also meant reading of a lot of books.

Twelve years have passed since I quit school at age 21. The world, to me, has become smaller in a way: I can now see that I have a place in it, what that place looks like when it takes on my outline. In the intervening years I have defended my position as a college dropout. I’ve used phrases such as, “I don’t need your stuffy classrooms…” and “I wouldn’t pay money for what I can learn for free.” But eventually I began to see holes in my defenses. I also began questioning my fierce conviction that I alone knew what education was.

What would it be like to study again, I wondered? What would it be like to study what I love (writing)? These questions fizzled inside of me like seltzer water. In the beginning I brushed them offs. But one day I stopped and listened. On a day quite like today, in which the bright winter sunlight cuts sharp angles over the Rome rooftops, I came across a newspaper advertisement that read, “Are you thinking about going back to school? Are you wondering how?” After an afternoon of online research, I went home and told my husband, much to his surprise: “We’re moving to New York City. I’m going back to university.”

One year later, I’ve applied and been accepted. If wasn’t for the messy bureaucratic process of getting my non-American husband into the United States, I’d be starting school this winter. As it is, I have to wait until fall.

Like my first change more than a decade ago, from a serious, honors student to a dropout, this one also promises to carve out new definitions of life and new convictions. I’ll surely learn again what is meant by education, but most important I’ll learn more about what it means to be me.