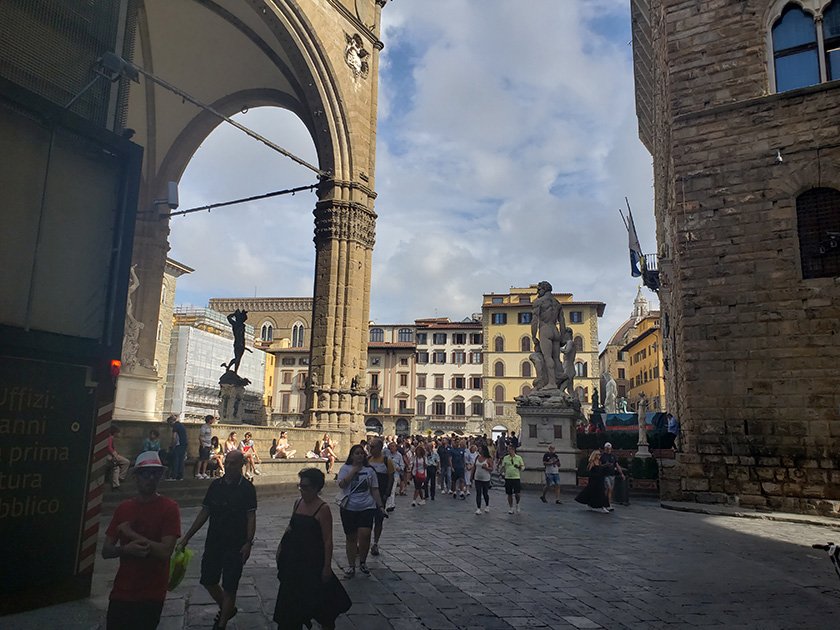 By 9:00 a.m., the Piazza Vecchio is mobbed with tourists. In the distance is the spire of El Duomo, Florence's cathedral.
T

he difference between stupidity and genius is that genius has its limits. • Albert Einstein

I have gone from washing laundry in a bucket at 18,000 feet to a washing machine, from reading a book to watching television, from eating cold rice to hot paninis. I have moved from the dark ages to modern times. I have traveled from Nepal to Italy.

Suddenly, civilization is not as comforting as it once was.

It has been more than eighteen months since I was in Europe, France. The lockdowns emptied towns, closed shops, and caused people to wonder if life would ever return to the glory days of sun-strewn golden streets, unexpected laughter, and unbounded joy. At least, to hear people talk about pre-pandemic life, that was the way things were.

Now the old life is back and for me the reality is, if nothing else, enlightening.

Here in Florence, the Italians have left wholesale, flocking to the hills and the coasts in their annual flight from the August heat. Nevertheless, the streets are a squeeze to pass through, and the restaurants and outdoor cafes spill waiting lines into piazzas and along sidewalks. I have only the evidence of my eyes, but I would wager tourists outnumber residents.

Could we manage to live well, travel, and enjoy life without burning all that CO2, polluting the planet, destroying our children’s future?

Someone waking from a three-year coma would see life here as usual, not as an unexpected and uncomfortable experience. (By no means is this return to “normal” an Italian exclusive.) Were it not for the very occasional mask-wearer (who could of course be explained away as an idiosyncrasy), one would swear nothing was off, nothing cataclysmic had happened.

But it did, and once again nature’s lessons fell on deaf ears and dull brains.

I can only state it plainly. I have traveled the world for fifty years, and the one and only universal human trait never to disappoint me, because it has never failed, is stupidity.

Living in one of the poorest countries in the world, Nepal, showed me (yet again) that although a simpler life is not easy it can work. (Of course, in Nepal simplicity is not a choice; it is a fact of life. But even where luxury is available, one can choose to live simply.) During the height of the pandemic the air in Delhi was shockingly clean, the canals in Venice sparklingly clear, and all around the world there was the comfort of silence. It was a world in which you could hear your own thoughts.  Yet, humans have not chosen this simplicity. Again.

Could we manage to live well, travel, and enjoy life without burning all that CO2, polluting the planet, destroying our children’s future? Why yes, yes we could. In fact, for a time we did. The pandemic and places like Nepal prove it can be done. Are we going to make changes? Oh, hell no. Pakistan is under water; France and the United States are on fire; Greenland is melting. Floods and fires are destroying life everywhere. And nothing, nothing, is being done about it.

I’ll let the social scientists argue about why this is. I sweep it all under the rubric of instant gratification. Everyone wants what they want, now. The concept of self-sacrifice is all but dead, and not even the horrific consequences of their own children suffering will move people to change the way they live.

Before the pandemic was over, in November, 2021, in Glasgow, Scotland, the United Nations held its twenty-sixth Climate Change Conference, COP26, where nations once again pledged action. What idiocy. A glance at the records shows that not one nation has fulfilled a single environmental pledge in twenty-six meetings.

I can’t say I’m disappointed, for to be so would mean I expected something different, and my encounters with human stupidity have taught me to have no such expectations. Still, what my travels tell me is that children are going to suffer greatly, and all because people today think they deserve €7 imported bottles of beer and steak sandwiches.

This is the moment when I tell you that I no longer have sympathy for the human species. It is going to get everything it deserves, which perversely is nothing, nonexistence. It is the innocents I mourn, the babies born now who will not live a “normal” lifespan because grandpa didn’t believe in climate change and wanted his truck big and his bacon every morning.

Too many have told me that while people can do something to help, it is governments which must act, but this only puts the lie to the contention that democracies are the people. In truth, it is only the people who can act. They haven’t.

The plain fact is that of each person’s contribution to this global catastrophe, an average of 40% comes from eating meat.

Today’s proposed solutions to the impending disaster are complicated, but they didn’t have to be. I have never once proselytized on vegetarianism, but the plain fact is that of each person’s contribution to this global catastrophe, an average of 40% comes from eating meat. In 1984, the eminent scientist Carl Sagan testified to congress that climate disaster was coming unless we acted. Had people merely cut their meat consumption in half then, we wouldn’t be in the mess we are.

It is fair to ask where I stand on this, what I have done to stem the tide of ruin. The pot calling the kettle black doesn’t get anyone anywhere. Well, on this issue, if on nothing else, I cannot be tarred.

For half my life, more than thirty years, I have lived off-grid, solar-powered, with rainwater from a very large tank. The past year I have powered an electric car by sunshine. And during all this time, I have been a vegetarian.

People don’t have to live like me, but for more than four decades everyone has had a chance to live better and refused. Now the bill is due, and so many people are whining about paying it. Tough.

Washing clothes in a bucket is hard enough when it’s a choice. Wait until you do it when it’s all that’s left to you. You won’t like it. What you think won’t matter. It’s coming.