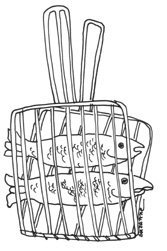 he myth that most children hate fish appears to be prevalent only in societies in which fish is not presented (or cooked) with tender care and handling. Even Mrs. Paul’s Fish Sticks can tempt the most skeptical small being, and I, for one, have always loved all fish, especially cod. Perhaps it began in childhood; my mother was a great cook and made true cod attractive to us with tartar sauce, fresh lemon, béarnaise, or vinegar served over flaky fingers of fish, fried crisp and golden in olive oil.

It was a far better than the requisite cod liver oil children were forced to swallow. My love of fish continued on a trip to 1960s England. Real cod was used to create delectable fish and chips (imposters have since taken its place.) My love of cod may also have come from a fascination with codpieces, the use of which I could not fathom at eight but understood better as my hormones grew up.

And last year I stumbled upon the book, “Cod,” which along with “Salt” (Mark Kurlansky) used fish and seasonings to narrate history. It was far more alluring and intriguing than what I got in prep school.

Now I find myself in the heart of Cod Land, both in France, where we eat all sorts of cod dishes including the transcendental French dish, brandade, and in Italy where the seductive odor of frying cod floats up to and over our balcony from the tables below at Bar Filettaro, Rome’s only restaurant devoted only to cod (Largo dei Librari — just off Via dei Giubbonari — packed every night except Sunday).

Which brings me to Madeleine Johnson’s harrowing experience with cod [“Baccalà assailed”] from which I truly hope she will recover, if only to try a new one with no heartaches, no hammers and saws, no wasted time, no smells of wet puppies, and a result fit for the long lost kings of Italy or anywhere else for that matter.

As a cookbook writer, my premise is to encourage anyone who wishes to cook to plunge in with no rules, as little work as possible, and great joy in the experience. The brandade recipe (which takes all of about 20 minutes once the cod is soaked) is a gussied up version of the regional baccalà mantecato mentioned in Johnson’s article, but I guarantee any cook great success and many accolades a tavola.

Brandade also carries you forward. It freezes well for later use at parties. You can use it as a spread or on halves of the little sweet tomatoes we find in local markets.

Obviously, the more reliable the market, the better the fish.

In Rome, cod may be found at Ruggieri in Campo de’ Fiori and Carilli, via di Torre Argentina on Friday, pre-soaked for you. Be sure to order it on Thursday and ask them not to soak all the salt out of it as that action will also take some of the flavor away. Best to soak your own in order to monitor the flavor of the fish.

DEPENDING ON the saltiness of the cod, soak it in cold water for 2-4 hours, changing the water once. Sink your teeth into the cod and taste for saltiness. It should taste pleasantly salty but not make you gag. Drain.

Put the cod in a deep skillet with potato, celery, onion and carrot. Cover with cold water, cover the pan, and bring to a simmer.

Simmer for 10 minutes, then turn off the fire and let steam for 5-10 minutes. Remove cod to a plate, pour the broth through a sieve, cool and store it for use as a base for a magnificent soupe de poisson.

Remove any skin. In the food processor bowl, place the cod (check for bones), potato, garlic (put through a press), parsley, a few turns of a pepper mill and the lemon juice. Blend, pouring olive oil in a stream through the opening of the bowl, to a consistency of mashed potato. Serve on slices of tomato or toast or just eat with a spoon, as I do.