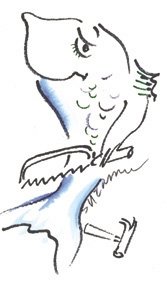 very now and then I fall for perverse compulsions to perform deeds I know I will regret. I should know better by now. One such compulsion cost me a piece of my finger. Another took several layers of skin off my tongue, when I fell for the siren song of elder siblings who convinced me to do an experiment with my tongue and a frozen ski pole.

Last year a side of salt cold — baccalà or stoccafisso — sang a similar siren song from the market stand where I buy olives, lentils and mostarda.

Now I do not like codfish. It might have been important for American history and the food of my ancestors from Boston — the “land of the bean and the cod.” But this only proves that its best qualities are those that do not have to be tasted.

However, my children, who normally shun food that swims and smells, do not agree. Or so they led me to believe while visiting Veneto grandparents. There they lapped up baccalà mantecato, a Proustian comfort food that evoked cozy childhood kitchens and stolid domestics from Friuli. At Harry’s Dolci in Venice, the children even made a bella figura of us all, choosing this adult, local delicacy over pasta al sugo.

As a good mother, I thought I had found the perfect trick for getting disliked food into tiny stomachs. Just drown the salt cod in oil and pulverize it beyond recognition into baccalà mantecato, and they will eat their fish.

Two considerations, like far-away voices, suggested the experiment would be at the very least “interesting.” First, cookbooks had informed me that this was not an easily-performed trick. Plus, I had noted that those misty-eyed relatives never made baccalà mantecato themselves.

I vacillated, telling the vendor that I avoid recipes that require many days and hard labor with mortar and pestle. But no, it is only a myth he assured me. You can easily make baccalà in a food processor with just a minimal sacrifice of genuinità. I do not own a vessel big enough in which to soak the fish for three days, I retorted. No problem, he assured me, just break the beast in two.

Which is what I tried to do when I got home. But the beast — still in its vacuum wrapping — just sprang back. I then removed the plastic. It still bounced back, only now it smelled like the family dog after rolling in dead fish. I went for my toughest tool, a cleaver allegedly made from the re-cast springs of Model-T Fords. It bounced back too. In my Tru-Value Hardware tool-box, I found a small hand saw. With the filet placed flat, the tiny tool skittered playfully across the hardened skin and spine. Placed in vertical, swimming position, the fish flank twisted mischievously when the saw teeth bit into it.

Even my father, who had always told Saturday-afternoon-home-repair whiners that “It is a poor workman who blames his tools,” would have seen I was going nowhere without a vise and cross-cut saw. All I had though was the washer repairman visiting me that day. Did he think it was his lucky day or his worst nightmare when a foreign, blonde housewife asked him to interrupt his work to perform “un piacere”? With my hands as a vise and his on the toy-like saw, we got the beast cut in two.

I had a three-day rest while the fish soaked out on my balcony. Then separating the flesh from the skin and bones fouled another series of tools. I divided the pile of fish — expanded after its soak — into batches and put the first one into the food processor, dribbling the oil in; just like making mayonnaise, according to the ever-quotable vendor. He had not mentioned baccalà’s unique ability to defy the laws of thermodynamics. The grey mass inside the machine expanded exponentially into a quantity unrelated to the original input. It pulsed and pressed against the processor’s cover like the malevolent sea-creature outside of Jules Verne’s submarine porthole.

At this point I should have remembered another type of compulsion I frequently suffer from, my Puritan habit of doing things the “pure” way, the “hard” way. I should have known it was time to forget the vendor and transfer the whole mess to mortar and pestle.

Unrepentant, I emptied the food processor of half the grey mass and re-started its motor. In seconds, scientific laws again proved fallible, for the motor foundered and the fish pushed newly on the machine’s cover. Out came another half and on it went; the process repeating itself, diabolically filling the food-processor bowl every time. Dr. Seuss would have been delighted. The incoming quantities never diminished, while the out-coming grey goo piled up in bowls and slid on to the floor.

The children fled the kitchen’s smell of old fish and overheating electric motor. The food processor slipped through my hands like the greased pig at a county fair. With the kitchen floor as slippery as the wet deck of a heeling boat, I used the oven-door handle as a railing.

I gave up, and threw what I hadn’t processed in the freezer. The adult Milanese victims loved what actually got mantecato. I could not bear its sight. And the children? Away from the Giudecca and the Cipriani plates, baccalà mantecato was just another swimming, smelling food.

For a year I shifted freezer containers about, often perplexed about the now-unidentifiable contents. But when the Veneto relatives came to Milan, I remembered what was under the frost in those containers. I could both please them and avoid the sin of wastefulness (those Puritans again).

Everyone was happy. The relatives lapped up my baccalà mantecato. And I savored coming the closest to Marcel Proust as I ever will. For they spent the evening reminiscing about the cozy kitchens and Friuli domestics of their childhoods.