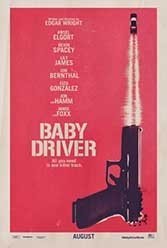 It’s been 40 years since John Travolta’s Tony Manero turned heads while carrying a can of paint down a Brooklyn Street in “Saturday Night Fever.” Now that charm and grace are back, performed by Ansel Elgort, the “Baby” of “Baby Driver” in writer-director Edgar Wright ‘s latest film.

Don’t dismiss “Baby Driver” as just another heist-caper flick of the one-too-many, destined-to-fail variety. It’s more than that. Like Manero, Baby exudes a captivating, magnetic, balletic physical self-confidence. Whether driving (his role in the heists), delivering coffee, or fleeing from the police, Baby is all elegance and care-free movement, his style heightened by the music he must have to drown out severe tinnitus. He’s beautiful to watch. The first half of “Baby Driver” is virtually a luscious musical, what could have been 2017’s “La La Land.”

Unfortunately, the second half is, indeed, a prosaic heist-caper flick, albeit with state-of-the-art car chases and starring some heavyweights. Jon Hamm (“Buddy”) of “Mad Men” fame overacts his way through the film in another attempt to show he’s more than just Don Draper. He’s not. Kevin Spacey is marginally better as the mastermind, but his Doc is an inconsistent character who can’t quite hold together the criminal’s moral code. He’s no Godfather.

Baby’s fluid screen presence is all the more lyrical set against the oppressive concrete and glass jungle of Atlanta, where every other building is a parking ramp. Atlanta has a symbolic function; it’s a stand-in for the East Coast: for crime, corruption, violence, and cities that contain and restrict.

In contrast, Baby’s vision of the good life resembles that offered in Jack Kerouac’s 1957 novel “On the Road,” a book that features Dean Moriarty, another angular figure and superb natural driver. Like Jack and Dean, Baby longs for the openness and freedom of the West, experienced in an automobile.

The story moves forward when Baby meets and falls in love with Debora (Lily James), a charming café waitress. Debora has a presence of her own, but for Baby she represents nostalgia for an earlier, simpler time: again, the late 1950s. He imagines her in ’50s dress, standing next to a classic car from the era. She, in turn, will send him postcards that valorize his nostalgia. And so they drive off into the sunset. A pretty picture, but not up to the film’s initial promise.