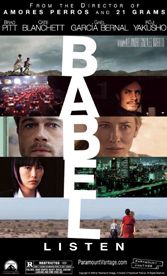 Alejandro González Iñárritu’s much-praised movie is a mournfully life-affirming speculation about the meaning of global connection and the ties that bind. An American woman on vacation with her husband in the Morocco desert is shot inadvertently by goat-herders whose rifle was bartered from a villager who received it as a gift from a Tokyo man. The American woman has two children tended to by a live-in Mexican housekeeper; the goat-herders have a preoccupied father and the Tokyo man a deaf-mute daughter. Iñárritu starts with the Moroccan incident before branching out to Tokyo and Tijuana.

The idea of hitched story lines seems typically Californian (“Short Cuts” “Grand Canyon,” “Magnolia,” “Traffic,” and “Crash”) and Iñárritu, who is Mexican, used it in “Amores Peros” and “21 Grams.” By internationalizing the cultural and political canvas, he widens his ambitions. Love of family and children are a universal language that trumps the impersonality of citizenship. Transgressors and victims are always someone’s children. Bureaucracy is villainous because it artificially and willfully breaks the familial chain. Iñárritu digs at the U.S. terrorism obsession in the Moroccan segment, but it’s in Tokyo, with the breathtaking Rinko Kikuchi as the deaf-mute teen, that the film plumbs resonance and gravity.

Here is Homeric poetry told with Latin sobriety in which superb actors (unknowns and celebrities such as Cate Blanchett and Brad Pitt) are gathered into a transcendent recounting.