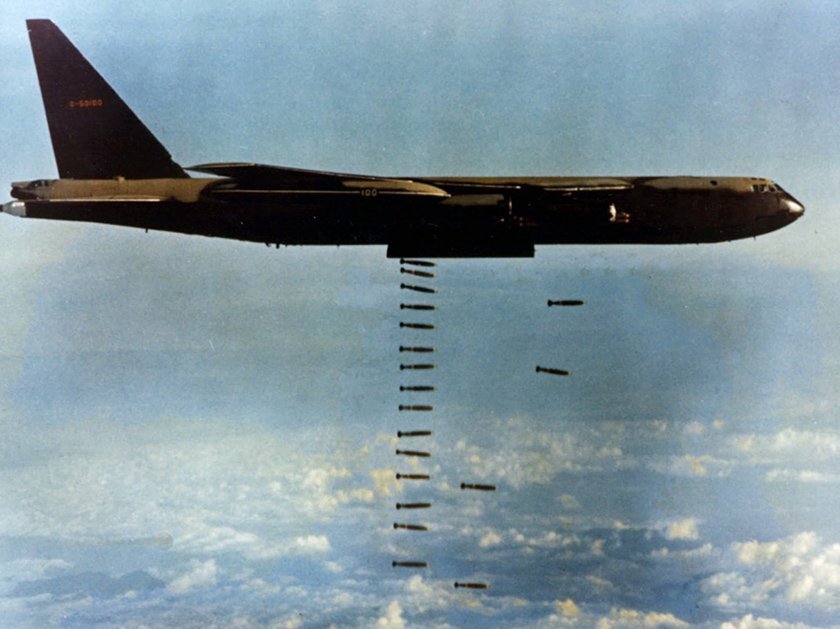 Long before the spirit of "woke," a "protective reaction" over Hanoi during the Vietnam War.
I

woke recently from a protracted linguistic slumber to find myself enlightened. During my somnolence, woke had been transformed from the act of shaking off sleep, a verb, into a proto-noun-cum-acronym for any person or institution mindful of the history of racial and social wrongs and determined to be labeled among those eager not to repeat them. In effect, I woke to woke in a different key.

Language is and always will be a sloppy child who leaves a trail of tissues, bottles, and dirty t-shirts on its already cluttered floor. Usage long ago ditched the correct and incorrect to make room for all the clutter, creating a vast heap of words transformed or incidentally invented to suit the times, and these times are in love with abbreviation and all-in-one brevity.

Why then say you’ve become more enlightened or more sensitive to unfortunate historical events when you can simply be a tribesman (no, wait, tribes-person) among the “woke,” who are not, by the way, the “awoken” or the “aware” because those two words are far too conventional and totally less awesome. “We want to respect woke values” sounds infinitely cooler than “We wish to be mindful of past discrimination so it never happens again.” Who on earth has time for so many words, in particular if you’re drafting a social media mini-opus?

Who on earth has time for so many words, in particular if you’re drafting a social media mini-opus?

The new “woke” is in the vein of “hip,” a Beat Generation moniker (its roots in West African slave slang) took the likes of  “hipster” and “hippy” and cousin “with it” into the 1960s before Disco stole the show. “Hip” and “with it” meant trendy, but who wanted to speak the banal “trendy” aloud? It wasn’t hip.

Cool has stood the test of time, bridging generations in part because different things are cool to different people, and what better approving word to utter in a time of global warming? But cool did become lonely, and in this century has taken a mate, or modifier, so that cool isn’t cool but very cool, with the “very” adding umph to the mix. The number of times two speakers can exchange the phrase “very cool” over a lengthy conversation numbers in the millions, though isn’t as high as the greatest verbal suspension bridge of them all, “you know,” as in “well, you know…” Often the listener does not, but he, she or it is usually very cool or woke enough not to make a fuss.

Interestingly, the military was the institution most responsible for planting the seeds of brevity, abbreviation, and acronyms, though its goals were not to elucidate but conceal or temper. During the Vietnam War, an undeclared war, speaking in warlike terms seemed, well, you know, not cool. Plus, few at the time were woke: the landmark Civil Rights Act wasn’t passed until 1965. So not cool, with so as charging modifier.

When American B-52 bombers raided Hanoi and ventured into Cambodia these trendy little missions were labeled “protective reactions.” Decimated villages were collateral damage, a phrase that never lost its cool and found its way into the language of business.

The earliest acronyms arose from the need to keep Morse Code messages short and easy to remember on the Morse keyboard. The longtime distress signal at sea, CQD, “come quick danger,” was revised to SOS because the tapping of the message was far simpler, dot, dot, dot, dash, dash, dash, dot, dot, dot. All this is of course ancient history, which, as you know (or do you?) is exactly want got us to woke.

What, one wonders, would the likes of Winston Churchill sound like in this age of LOL? What would have become of his post-Battle of Britain line, “Never have so few done so much for so many”? Best guess is a string of emojis supplanted by a very cool video available via the @BEATBLITZ hashtag.

Then again, colonialist Churchill wasn’t woke, nor, BTW, was the whole of his era, one that considered “l,” “g,” “b,” “t” (and its many companions) not as gender demarcation lines, but very cool Scrabble letters.