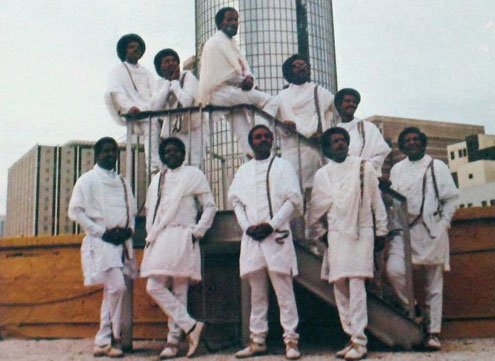 Hailu Mergia and the Walias were key figures in an Ethiopian musical renaissance eventually derailed by the Derg junta.
T

wo independent music institutions recently released some noteworthy work. One is a blog-turned-label that has been faithfully documenting a continent’s lesser-heard releases; the other is a group that has been mining the extremities of jazz for years.

We’ll start with Awesome Tapes From Africa, which New Yorker Brian Shimkovitz gradually transformed from a musical blog into a full-fledged label. After spending 2005 in Ghana on an ethnomusicology scholarship, Shimkovitz returned to America and began posting what he’d found during his excursions. Word spread slowly but steadily. In 2011, the success of the blog (along with Shimkovitz’s occasional DJ outings) helped inspire the creation of a reissue label by the same name.

Shimkovitz is a serious musical archeologist. His latest recovered nugget is Hailu Mergia and the Walias‘ 1977 album Tche Belew. A little context: Mergia was a founding member of the Addis Ababa-based Walias, a group that found success in the early 1970s by backing Ethiopian singers with Western-style funk music. Though Tche Belew actually toured the U.S. in 1981, the band had the misfortunate of existing during the years of the brutal Derg military junta that took over following the ouster of Emperor Haile Selassie in 1974. In fact, Mergia and three others never returned home from that American tour.

But listening to this you’d never know they labored in darkness. It’s a vibrant recoding that featured Mergia’s considerable keyboarding talents. The title-track cuts right to the groove with a wah-wah guitar sound and rolling bass line anchoring Mergia’s keys. What’s particularly notable is the careful arrangement and restraint. Rarely do instruments feel misplaced or unconvincingly delivered. They’re a tight act.

Though “Woghenei” features just a touch of vocals, Tche Belew is almost entirely instrumental. Though you could point to any number of American soul and funk bands as an influence, “Ethio-jazz” founder Mulatu Astatke is also a key figure (though Astatake had fled Ethiopia by the time the album first appeared, he plays vibraphone on the famed “Musicawi Silt”).

Fans of contemporary acts such as The Budos Band, Low Mentality or The Souljazz Orchestra will find much to like in this re-release, which represents an important Ethio-jazz footnote. Though the recording quality is muddled by age, Mergia’s exceptional keyboard and synthesizer work shines through, ably aided by the rest of the well-oiled Walias. As the Awesome Tapes From Africa tagline goes, you’ve got to hear this.

The other institution is Norway’s Supersilent, an amorphous collective of musicians loosely filed under the avant-garde jazz rubric. They’ve been plugging away at the fringes of improvisation for the better part of a decade and a half.

The group’s latest release is 12 (Rune Grammofon), a title that is typically succinct but entirely unhelpful when it comes to describing the music. To call this stuff jazz is generous. Supersilent is totally reliant on interpersonal relationships and 12, like the records before it, is a one-of-a-kind experience — since they never discuss the music with each another and never rehearse before gigs. It’s unlikely you’ll ever hear these songs live. It’s pure improv.

A wide variety of sounds will nevertheless keep you engaged. For those attracted by the jazz angle, hints of Arve Henriksen’s trumpet weave their way in and out of the surroundings (“12.5” is meditative, “12.7” exploratory). For electronic fans, the distorted electronic loop of “12.6” is a highlight. For rock lovers, the bass-heavy ambient opener “12.1” and dark “12.11” offer nods to Norway’s famed doom-metal scene. Occasionally it’s little more than meandering noise.

Because the group knows no boundaries, listeners can lose themselves among limitless influences blending together so seamlessly. That’s the Supersilent risk factor. The reward is when they reel you in just as you’re ready to give up. Whether the song changes and a new experiment begins, or a hint of melody crops up to hook you, or Henriksen’s carefully deployed trumpet breathes life into a coldly bleak soundscape, you’re always on their page — excited but entirely unsure what comes next.