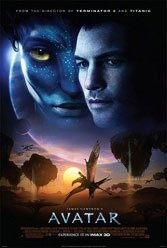 Take 5,000 years of human mythology and put it through a dull-bladed National Geographic Cuisinart and you get this, a digitally stunning sci-fi epic gifted with jaw-dropping if unintentionally absurd sweep. The technical marvels are worth several tipped fedoras. Story and pace, alas, won’t even cop you an old beret.

In the 22nd century, maimed Marine Jake Sully (Sam Worthington) is sent to the planet Pandora where the army is trying to protect greedy, mineral-hungry contractors from the tree-hugging locals known as the Na’vi. Jake is drafted into the bio-military “Avatar” program that lets him dream away his disability by transforming him into a hologram-scout. A military Alice in Wonderland with a conscience, he falls for the “primitive” amazements of the other side (plus a girl).

Squint hard enough all this blurs into “Dances with Wolves” made animated and set in an Amazon dream world heavy-handedly laced with Iraq War overtones. When the cripple soars, he becomes “the one” to the beleaguered natives. Cultural and military imperialism are redressed by the underdog.

All well and good (no, scratch that: Not so good). SFX heaven aside, the dialogue is plebian, Sigourney Weaver does a hack job mimicking her one-time “Alien” side, and the bad guys (Stephen Lang and Giovanni Ribisi) are too one-dimensional to laugh at. The reptilian Na’vi, while digitally sincere and wildly colorful, are little more than cartoon Indians with stupefying moves. Two hours in, tedium afflicts both leaps and gasping.

While the effects win over the naked eye in three-star heartbeat, this is no country for smart people: Cameron doesn’t get past his usual hackneyed self, a universe he’s inhabited since “Aliens” and “The Abyss.”