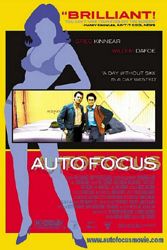 Never mind if the story line is true to Crane’s actual undoing (most complain the real Crane was anything but a saint). What counts here is the portrayal of a tempted man who can’t and won’t say no to his new buddy, who’s not only at home fringes of morality but also happy to have the upper hand in a male partnership. Schrader’s handling of gay overtones, introduced in shades of sexual nervousness, is deft enough to induce just the right kind of personal discomfort.

Dafoe is typically stalwart, at home with the licentious. But this is Kinnear’s show. Long among the most underrated actors in Hollywood, his naïve but willing Crane is persuasively banal, a man in desperate need of approval, a recipe for masochism. His descent into debauchery and personal collapse are wholly (and painfully) credible. The real-life Bob Crane was found stabbed to death in an Arizona motel room in 1978.