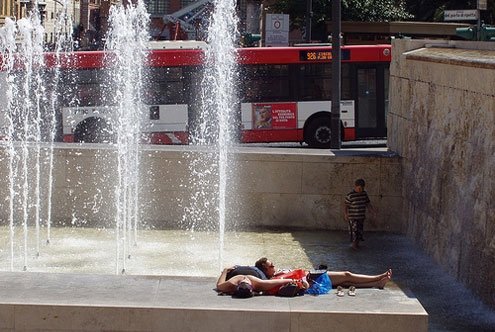 August is the month in which tourists own the city.
I

f you’ve ever thought about traveling to Rome in August, scordatelo — forget about it. There’s no worse time to visit the city. But you need to live here to really understand what that means.

Europeans have known about the Latin downshift for decades. The August break has been written about for decades. In 1964, journalist Luigi Barzini wrote about the “sultry days in July and August” when Rome is “emptied by the natives” and foreigners look like an occupying army in a city “abandoned by their fleeing enemy.” But despite lots of writing, the full impact still gets lost.

About half the country’s businesses, offices, restaurants, and shops close up shop for at least some portion of the month. And I mean close up shop. In some neighborhoods (no, not the center of Rome) you can walk for miles without seeing anything open. Not even newspaper kiosks. Nada.

Citizens stuck in città (the ones who don’t get August breaks) and need access to basic services are basically out of luck. They need work around the situation or make other arrangement. Want to get something dry-cleaned? Ha! Come back in September. What about your local car mechanic? Nice try! Take the bus. Oh, am I laughing? In August, buses adopt a glorified holiday schedule, a.k.a. they run whenever they feel like it.

Maybe you need a pharmacy for cough medicine. For every one that’s open, a second one is closed. There’s nothing like schlepping around the city looking for an open pharmacy when you feel like hell.

Did I mention you’ll likely be doing schlepping in sweltering heat without any air conditioning to escape into? A mall? Forget it. Most boutiques are too small to afford much relief.

Life is very different in local seaside towns. Most everything is open. Services run because they have to, and it’s profitable: Beach communities are where the bulk of Italians shift their day-to-day life. Few seaside restaurants shut down in August because that’s when they do bulk of their business.

But seaside towns have their own set of complications. Prices are high and service is often bad. It’s obvious why. Everything’s packed. Customer service (which hardly exists anyway) isn’t necessary. For vacationers, it’s sink or swim. You take what’s offered.

What I really love is how Italians plan for the August shutdown. My decade in Rome has given me a leg up on the tricks of the trade. I know better to ask beforehand when a business or a shop will close in August. I know that not all shops close for the entire month (which they did in the 1950s and 60s). Most pick two weeks, usually in the middle (to coincide with the August 15 Ferragosto holiday) or at the end, to get out after the holiday.

July can also be tricky. Especially at the end, with some businesses already beginning to fall asleep. With schools closed, the city traffic flows freely. Finding a good parking space — impossible in winter — is a cinch. Some Rome residents stick around in August just to enjoy the city’s emptiness and their freedom of movement.

There are also a slew of great cultural events put on or sponsored by the Comune di Roma (city hall). Most were started up in the early 1980s to help give August city-dwellers something to do (oh, most movie theaters are also closed).

The pre-August doldrums can sometimes be the most exasperating. Try walking into your dry cleaner in late July and being told that no, they can’t get your shirt done in time, sorry. Since when does it take two weeks to clean a shirt? The last two weeks of July serves as fair warning for the holidays ahead. No one wants to take on any work. That might give you the false impression they’ll be available in August.

Come back in September — dopo le feste, after the holidays — many tell you. All this while the country (and the world) is allegedly living through financial hard times.

Then there are those who huff, puff and complain about how their vacation couldn’t come sooner. They’re exhausted, they say. Most American employees get two weeks off (if that) while people here whine about how long they have to wait for their vacation month (they also get a week or so in December, right around Christmas).

Vacation-wise, it’s the American dream played out in Italy. It’s the good life Americans see in cheesy chick flicks. Don’t get me wrong. I have lived and worked on the “other” side, in the U.S. I definitely enjoy the perks of the “work to live” and not the “live to work” lifestyle. I just hate the August vacuum. Couldn’t we all get four weeks off and just choose the dates we wanted? Now that would be the good life.