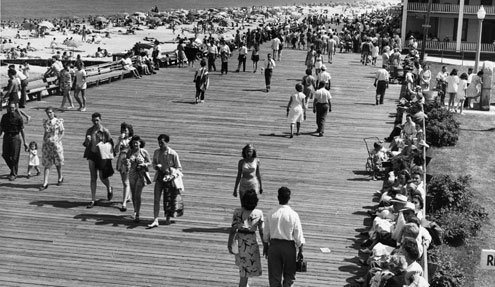 The boardwalk was a happy place, unless you read the headlines.
I

n 1968, I spent two summer weeks in August at a boardwalk hotel on the Delaware coast with my father. I remember the scrambled eggs, the jetties that looked like crocodiles, and my father’s glum mood, which didn’t abate even when we went to Funland where I played pinball machines and he smiled faintly.

He was in his late 60s and I was a restless young teenager. Every morning he rose at dawn or before and walked to the local pharmacy — there was only one — where big-city East Coast dailies were sold. Most arrived on the 8 a.m. bus so I knew where to find him if he wasn’t in our room.

The newspaper headlines of the time depressed him. As we walked along the boardwalk he’d enumerate the reasons why the planet’s days were numbered. It all seemed silly to me at the time — since my priorities were pizza slices and playing with sand crabs — but in retrospect the realities of the day were flammable.

The Democratic National Convention in Chicago had been disrupted by violent clashes between police and anti-Vietnam War protestors, with Chicago mayor and overlord Richard Daley unable to keep the peace. The riots lasted for days.

The Vietnam War itself, in its fourth all-out year, saw half-a-million U.S. troops at war with an average of 250 American fatalities a day. The 1968 Tet Offensive had made it clear the U.S. military effort was failing. President Lyndon Johnson — still adamant Vietnam was a jihad-style Communist stepping-stone to world domination — had opted against seeking a second term, undone by the war.

These figures made the news only because the two most charismatic and divisive figures in American race relations and politics, Martin Luther King, Jr. and Robert F. Kennedy, had been assassinated within six weeks of each other in early April and June, producing incredulity, violence and dejection.

In Mexico, just ahead of the summer Olympics, students and workers were at war with the government, which was spending millions on facilities in a desperately poor country. A few months later the tension would lead to massacre of protestors by the military. The Olympics, when the came, saw two American athletes stand on the podium, their heads bowed, their arms raised in the ominous black power salute.

In Paris, a place close to my father’s heart, students and workers had already joined together in pitched anti-government assaults, making France seem at times on the edge of anarchy. Paris had been repeatedly paralyzed. President Charles de Gaulle, bewildered by ferocity of the resentment, would eventually step down, the summer riots as the catalyst.

The Soviet Union, ignoring calls for restraint, invaded Czechoslovakia to quash a reform movement known as the Prague Spring. It was a swift and coercive take-over of a sovereign country, albeit under Soviet control. Western Europe feared the advance as a precursor to something far more sinister.

Egypt, Syria and Jordan continued badgering Israel after losing the Gaza Strip, the Sinai Peninsula, the West Bank, East Jerusalem and the Golan Heights in the 1967 Six-Day-War (all are still points of contention today). For my father, an Arab response lurked in the wings, which came in 1973.

Pundits in the major dailies spoke of the most perilous times in human history. Some suggested the world was poised on the brink of global war and little could be done to avert it given the range of tensions in both West and East. War with the nuclear Soviet Union, while so far postponed, couldn’t be far off.

So my father’s gloominess had not one locus but many, and not even the sun and the sea did much good. When France exploded its first hydrogen bomb in late August, his melancholy seemed deeply folded as the bomb’s great cloud. The world, he said, on the bus back home, was living through its most dangerous historical period.

Forty-six summers later many now hold the position that my father held then, that the world is on the brink of an irrationally alarming phase that no one can broker. The hostilities of 1968 were secular, and for that reason perhaps threatened only on a conscious level; the ones now are more religious, if not viscerally medieval, and thus less available to Western logic.

Prompted by my father elegant Cassandra warnings, I spent a number of summers waiting for the world to cave into inevitable doom, often returning to the 1968 boardwalk, and to the newspaper and Funland — even after his death. New crises emerged, gained steam, and passed. A planet addicted to many forms of violence seemed nonetheless unable to commit collective suicide.

I did recently look up the hotel where we stayed that doom-and-gloom summer, hoping it might have closed, as if to make good on some small piece of paternal prophesy. But it’s open and thriving. There is no vacancy this August.