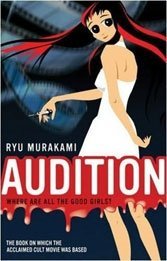 Though Murakami has always been a friend to the lurid (“Piercing,” “In the Miso Soup”), he never tires of it, nor it of him, with sinister material seeming to appreciate his flattery. In Tokyo of the mid-1990s, 42-year-old widower and documentary-maker Aoykami lets PR-agent friend Yoshikawa con him into a scam-tinted hunt for a new wife. Radio ads advertise auditions for a “cultured” leading lady who would star in a B-movie that both men know is unlikely to get made (“.. We’ll be duping ladies only of the highest quality…”)

Reluctant at first, Aoykami finally acquiesces and becomes smitten with an odd and beautiful 24-year-old named Yamasaki Asani who explains that having to quit ballet because of injury “was not unlike learning to accept death.” Though Yoshikawa warns him that the mystery girl seems a “little too perfect” and is unsettled by her past, Aoykami is besotted and the poison is released. Murakami makes no effort to hide his intent (“He had no way of knowing the unspeakable horrors that awaited him,” he writes of Aoykami as the bride search begins.) Foreboding helps Murakami’s cause, since he’s at his pulpy best in pushing the benign toward the unspeakable. Why was Yamasaki’s mentor maimed, his feet lopped off. Why does Aoykami’s teenaged son warn him about younger women? (“We’re not in the age of Love and Peace any more…”)? Why, finally, does a former geisha laconically insist that Yamasaki is “either a saint or a monster.”

Murakami not only has a preternatural understanding of male infatuation but also knows to sculpt women of seemingly “perilous fragility” who are in fact carvers of another kind, sexually teasing good and evil before putting the latter to work.