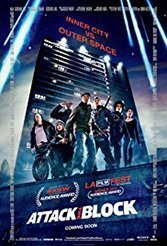 It’s modern-day Brixton 15-year-old Moses (John Boyega) and his ‘hood aren’t finding much to enjoy on New Year’s Eve. Sure, they mugged a young woman, but given the south London street scene, they did it the most benign, read clumsy, of ways. So what’s the reward for their adolescent machismo? A meteor shower that brings a whole lot of blind alien simians with day-glow teeth intent on invading their block.

The charm of director John Cornish’s overlooked sci-fi trifle is in the way it subverts premises. World in danger? Who cares when you’re the mini-warlords of your low-income apartment complex and it’s suddenly “raining Gollums,” as good a way as ever of describing an invasion by randy aliens.

The small creature the gang kills turns out to be a female, whose demise induces an onslaught of bigger and brawnier males. Meanwhile, Moses and his zany lot are forced to enlist Sam (Jodie Whittaker), the women they robbed, to help out. If aliens weren’t enough, Moses is also up against his local kingpin who thinks all the mayhem is part of a power play.

Throughout, the film has the feel of 1980s classics such as “Ghostbusters” or “Back to the Future,” while harking back to American matinee features. It’s playground stuff with side order of adrenalin and expletives.

Thankfully, the script sticks with this spirit throughout. When nurse-in-training Sam is called on to deal with a wound, she has one-liners ready: “I missed the class on alien bite wounds.” When one of the group suggests the prospect of an FBI plot, another quips, “FBI? This is England, ain’t no FBI, just some section six or something.”

Bodega, later to find fame in the “Star Wars” franchise, is the pitch-perfect gloomy teenager with noble instincts. Every member of his merry band acquires a personality, as do two street-slang rascals determined to slay the monsters with “modified” water guns. Sam is turns from skeptic to supporter. All in all, you don’t feel the death and destruction, and that in part is what fantasy entertainment is all about.