Attack Of The Wolf Peaches 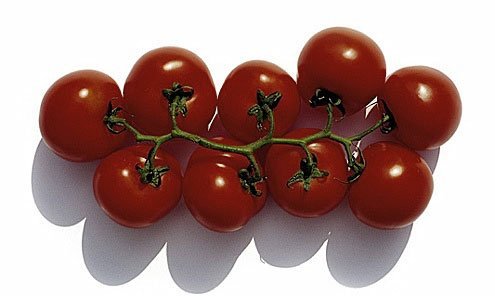 The tomato’s Latin appellation is lycopersicum, or “wolf-peach.”
I

f you’re in Liguria, you’ll see them hanging from reed tripods up and down the terraced slopes facing the sea. In Umbria and Tuscany, clinging to concrete and wire trellises. In Puglia, creeping along the ground in row upon endless row of deep green plants reaching no higher than a child’s knee (harvested by equally endless rows of illegal immigrants… the only people in Italy still willing to tackle such back-breaking work).

Pear or plum, ripe or green, fruit or vegetable, the tomato is to Italian cuisine what junk food is to America; so ubiquitous that we hardly even think about it anymore. The irony is that despite its importance in Italian cooking, the tomato is a relative newcomer to the Mediterranean peninsula, and like the immigrants harvesting it, the tomato had to fend off generations of diffidence and distrust before earning its own spot in the sun.

Originating somewhere in the Americas (some claim central America in or around Mexico, others claim South America in Ecuador or Peru), the first tomatoes made their way to Europe via Conquistador galleons around 1500. The Spanish brought the tomato back not as food, but as an ornamental plant, and its red “berries” were the subject of medieval suspicions. As a member of the Solanum genus, a plant family with a host of poisonous siblings including nightshade and bittersweet, tomatoes were quickly dissed by the Tuscan botanist Pier Andrea Mattioli (1501-1577). In his treatise “Medici Senensis Commentarii,” he claimed that the fruit was poisonous for men, though he admitted having heard that in some regions, the fruit was eaten after having been “fried in olive oil.”

The Italian word for tomato — pomodoro — is derived from the old Italian word for apple (pomo) and the word for gold (oro). Literally: golden apple. Anyone vaguely familiar with religious fanaticism in medieval Europe can imagine the unfortunate connations. The tomato went from poisonous to downright lascivious, becoming the province of alchemists’ love potions and magical filters during the 1500s and 1600s. Even the tomato’s Latin appellation — lycopersicum, or “wolf-peach” — is a testament to the distrust Europeans first felt for this hairy-leafed, woody-stemmed, red fruit-sprouting creeper.

It wasn’t until the 1700s that the first documentation of its culinary use began to appear, either fresh or boiled and crushed into sauce. That was the opening the tomato needed. Thanks to its unique, savory taste, as well as the ease with which it could be cultivated and harvested, the poisonous berry from the Americas soon made headway into courts and cuisines across the continent. By the beginning of the 1800s, it could be found in Europe’s first gastronomy texts and early cookbooks.

Today, of course, its supremacy is firmly established, and it’s hard to imagine a plate of pasta or a steaming pizza without the customary red sauce.

There are enough varieties, colors and types of the common tomato to fill a book, let alone a column. But I would like to spend a few words in celebration of a relatively recent entry to the tomato pantheon: the daterino.

Daterino tomatoes are small, roughly the size and shape of a palm date. They are bright ruby red, and usually sold in small cartons like strawberries. (In fact, some Sardinian daterino tomatoes are sold under the name “fragolino” in boxes specifically designed to call to mind the summer fruit’s containers.) Blessed with remarkable shelf life, you can usually find them in any of the big supermarkets.

Although only introduced into the Italian market a couple of years ago, daterinos are enormously popular. They are surprisingly sweet, slightly crunchy and have seeds so small they seem nonexistent. In short, they all but eliminate the veggie from the tomato, creating a sweet, rich, healthy fruit that you can pop and crunch like candy.

Earlier this month our son’s twelve-year-old cousin came to visit from Pennsylvania for a week. His mother warned us about his finicky eating habits, culminating in a particular distaste for vegetables. We decided to try a version of insalata caprese on him with halved daterinos, cherry mozzarellas, fresh basil and olive oil. He ate a full plate and came back for seconds. When we asked him what he thought of the tomatoes, he smiled a great big dental brace smile and said, “Killer!”

The Italian fruit-tasters’ association (Onafrut) ranked the varietals “Dasher,” “Madalina” and “Lusinda” as faraway the best-tasting overall, so if you have a chance to choose, try one of those three.