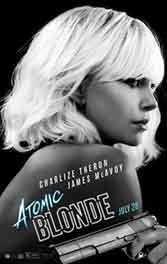 Director David Leitch’s movie, appropriated from a graphic novel by Antony Johnston and illustrated Sam Hart, is a fashion-statement cum spy thriller set in messy 1989 Berlin, a grungy, Weimar backdrop whose primary purpose is to give a pulsating heroine room to make like a predator. Theron is a perfect choice, if not the perfect choice. She’s tall, feline, supple and infinitely physical, a deftly female battering ram that also knows how to flirt. The story, set after the fall of the Berlin Wall, focuses on MI6 field agent Broughton, the bisexual 007 who teams up with CIA against KGB bad guys in possession a list of double agents (when is there not a list of double agents?) Dialogue is unimportant. This is not Le Carré’s disheveled Berlin. It’s more like graffiti Berlin as imagined by Yves St. Laurent (with an assist from Banksy) on behalf of Vogue‘s voyeur friendly action franchise, if it had one. It’s “John Wick” with a girl at the core. Charlize’s MI6 superspy exists to be posed and ignited again and again. She’s as compulsively watchable as the storyline is flimsy.

If you want gritty Cold War fare, fish out “The Spy Who Came in From the Cold,” but if you feel like beholding one of the world’s most stunning actresses performing pseudo-erotic cartwheels while heating up all she wears and cruising through male-style action (a trifecta fantasy in its own right), this is your flick. Theron, now 41, is the gold standard for thermonuclear Girl Power, which makes the title all the more apt.