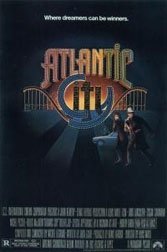 French directors have long seen the United States as a carnival of great vistas and a motel for lost souls. It’s a place that harbors dreams and decline in equal measure. Louis Malle set his beautiful melancholy in gamblers paradise Atlantic City, capturing its shambled husk phase before fistfuls of concrete casinos replaced prewar hotel resorts in the 1980s and 90s.

Lou Pascal (Burt Lancaster) is a creaking, minor gangster who insists on remembering his life as major and poignantly attends to Grace (Kate Reid), a widow who came to the resort for a Betty Grable look-alike contest decades ago and never left. She and Lou are relics.

In comes Sally Matthews (Susan Sarandon), an ill-starred girl from Canada who thinks the boardwalk town still has glitter and gold. A blackjack croupier in training, she’s convinced she’ll make it big. But bigness is gone from the equation. All is grimy and sad except human kindness.

The twist, in addition to odd couple friendship between old hustler and new arrival, is the appearance of Sally’s estranged junkie husband Dave who brings a Mafia problem to her doorstep. There’s a drug deal brokered by Lou and a promise of cash. But even that goes south and things fall apart. This was Lancaster’s last great performance and Sarandon’s first. Malle understands the “back then” architecture of nostalgia (“… It used to be beautiful — what with the rackets, whoring, guns…”) and makes Lou its ambassador.

Though much applauded, the French-Canadian co-production hit the scene at the same time as “Reds,” “Chariots of Fire” and “On Golden Pond,” each of which had more predictable Oscar tailoring.