At one with four wheels 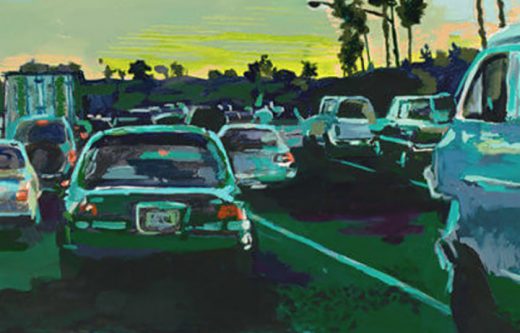 In Los Angeles, car life takes on vivid if not sociological colors.
A

s a native Californian and, perhaps more importantly, an Angeleno, I have spent a disproportionate amount of my life in cars. Getting around without one, while possible, is not (put diplomatically) very easy. With its myriad freeways, generally temperate climate, and vast urban sprawl, L.A. — a 20th-century city — was built for driving. Cars here are as much a status symbol as anywhere on the planet. The logic is pretty simple. If you’re going to be spending so much time in a car, you might as well enjoy it.

For more than a decade, I have been driving my late mother’s car. The beige Nissan Maxima was only three years old when I inherited it. My mother had cancer, and I’d been helping her by driving her to doctors’ offices, radiation treatments, and infusion appointments. I used it to get to the grocery store, the pharmacy, and to many interviews (I had just graduated from law school).

I sometimes wonder what that must have felt like, to finally strike out on your own.

Brand new at the time, it was the first (and only) car my mother bought entirely on her own. Not with her husband (she’d been divorced for two years when she bought it), or with her father, who had already died. This car was all hers, and I sometimes wonder what that must have felt like, to finally strike out on your own after about a quarter century of being married. So the car was a milestone, a marker.

I’ve had quite a different life experience than my mother. I’ve been living and working on my own for a long time.

I bought a car on my own when I was only 22 and needed to get to work, which was located in a difficult-to-reach part of San Francisco. That car was nine years old when I bought it, and I paid for it using money that I’d been saving up since I was 13. It was a cute black Jeep Cherokee and I loved it. Though it already had more than 190,000 miles on it, and, as most used cars do, came with a paper trail of history, I’d bought it from its original owner who’d put an ad on Craigslist. This was back in the days when the site was still only active in the Bay Area. My little Cherokee was very used. And it soon got to know my San Francisco routine.

Ah, the memories of driving a Jeep on the most crooked streets in the world!

I had learned to drive in LA, which also has its fair share of crooked streets and canyons. I’ll never forget getting my license at age 16. It was a right-of-passage.

Ah, the memories of driving a Jeep on the most crooked streets in the world!

I didn’t actually drive much until my senior year of high school. At the time, I usually used my mom’s car (she’d just replaced a used one with a slightly-less used “update”). I got to drive the left-over, an ugly green Datsun the family had owned since just before my little sister was born, about a dozen years in all. I never grew attached to that car.

During college in San Diego I didn’t have a car at all. I rode to campus and back on the bus or carpooled with roommates. Then came San Francisco and the Jeep Cherokee, after which, back in L.A., I settled into my mother’s new car, which is now mine. Over the years I’ve driven it everywhere. I took it with me when I moved to Washington, D.C., getting lost inside and outside that city’s Beltway. When I left D.C. two years later, I took it back to L.A.

The beige Nissan is growing old. There are tears in the leather seats and bumps all along the chassis. It can still play cassette tapes and CDs, which I suppose makes it a dinosaur. But I don’t care. I love it. After all, I have CDs and a couple of cassette tapes. And sometimes I still feel my mother’s presence beside me as I drive along the freeway.