At home with the McKenzies 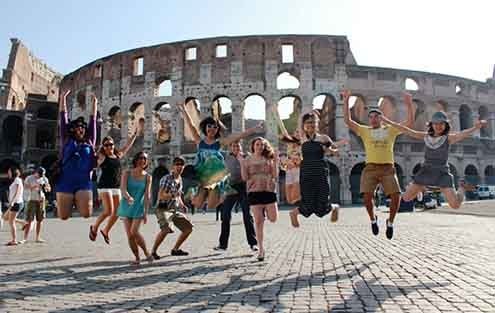 A detailed cultural guide may not be necessary.
I

recently completed a brief stint working for my alma mater’s study abroad program. The college was launching its first, month-long stay in Rome, and hired me as a “cultural advisor” to its 19 selected students, a mix of juniors, sophomores, and a lone freshman.

My own experience in Rome at their age was the compass that had spun me in the direction of Italy, and led me to Bologna and then to Rome. I wondered who, if anyone, in the group would love Italy the way I did.

In preparation for their arrival, I spent weeks drawing up an introductory guide to the city, which I cleverly titled “Rome like a Local.” In it I included a thorough, detailed description of must-try, Roman pasta dishes, along with where to find them; a run-down of the vibrant neighborhoods beyond the historic center, like Monti and Testaccio (look for the ancient Pyramid and John Keats’ grave here!”), I wrote earnestly.

I listed the best wine bars in the city, and offered a few tips I would’ve liked to have known when I first got here (latte is just plain milk, not a coffee drink). I carefully highlighted my phone number at the top of the packet so they would know whom to ask if they were looking to browse a new exhibit in the city, or just wanted someone to talk to. They had names like McKenzie (two in the group), Melissa, and Shane, which I memorized on the spot.

It didn’t take long before my idealized vision of their stay and their real stay went their separate ways.

The first complaints arrived from their hostel the morning after their arrival. The cleaning lady, whose typical duties were to change bedding and do a quick dusting, walked into a war zone. She found vomit caked along the base of the toilet, to go with an army of crumpled beer cans. I felt for her.

“But why were you drinking in your rooms? You have a whole city to explore!” I asked the jock of the group, their unofficial spokesperson.

“Well, we pre-gamed… we obviously went out after.”

With a jolt, I was reminded of my own college experience, where a delivery pizza and a marathon of “Gilmore Girls” was the ideal Friday night. I’d never pre-gamed, during or after college.

“Well, what about the wine bars?” I asked hopefully.

“We went to an Irish pub, does that count?” he chortled.

As the month progressed, a romance developed between Josh and Katie. All the girls pined after Josh; all the boys, Katie; so it made sense the two most popular of the bunch would pair up.

But Josh and Katie’s budding relationship caused McKenzie no. 2 to ditch the field trip to Ostia Antica and hole up in her room for all of a Monday. The rumor was that she’d chosen to come to Rome because she knew Josh would be here, too. McKenzie’s dismay at Josh’s disinterest caused Robby equal parts disappointment and resignation; he, after all, harbored feelings for McKenzie.

I noticed the students all travelled in a pack, a herd of polo shirts and flip-flops, uneasy at the prospect of peeling off into smaller groups, surprised when a trattoria couldn’t seat 20 for lunch. While the majority traveled on the weekends, heading to Prague and Copenhagen, I made friends with the ones who remained.

There was Steve, who ate only white food, his diet consisting of chicken, bread, and pasta with butter — he’d apparently tried tomato sauce on a dare during the trip and gagged. There was Cody, a Classics major who took the afternoon to tour the Domus Aurea by himself for the third time; and Xing, a history major from China who allegedly stayed up until 8 a.m. playing video games and researching for a grant he’d hoped to win. Unsurprisingly, he slept all through morning classes. I took them for gelato at a hole-in-the-wall place (Steve got vanilla only) and walked them through Trastevere, an older nerd with a few younger nerds. I hoped I wasn’t boring them.

With the exception of the occasional hiccup — Luke lost his keys and Lindsey got in trouble in Greece for manning an ATV without a driver’s license — the month went by rather smoothly.

Yet I realized my carefully prepared packet had been in vain.

“You can get a McChicken at McDonald’s for only a euro!” McKenzie no. 1 told me.

No one had ever been to Monti, and when I meekly asked if they’d enjoyed Italian coffee, I was told nothing compared to Starbucks. Maybe I’d been a poor cultural advisor after all.

Did they even like Rome, or were they dying to return to the land of homecoming games and Chipotle? At the final goodbye dinner, however, Katie raised her glass in an impromptu toast. With tears shining in her lovely brown eyes (Josh looked on proudly — McKenzie no. 2’s smile didn’t reach her eyes), she raised her glass to “the best month of our lives.” Perhaps it was the copious amounts of beer they’d consumed before arriving, but the others teared up too. I was presented with a framed photograph of the group posing in front of the Coliseum. Xing had slept late that morning, and his body was crudely photoshopped in, legless. They hugged me goodbye at the bus station.

I haven’t heard from any of them since their return to the States, but their photograph still sits on my desk, a reminder that everyone experiences Rome differently, and love comes in varying degrees.